"When Abba Benjamin was dying he left those around him this message:

"Do this and you will be saved:
rejoice always,
pray constantly,
and no matter what the circumstances,
give thanks.

"Deep gratitude opens us up so we can have a new sense of perspective, no matter what happens in life. People who have this grace are even noteworthy to those who encounter them. The circle of grace formed by their gratitude and the sense of perspective it brings shines through in the simplest of conversations with them.

"Once I was invited to visit India to offer some days of spiritual and psychological renewal. I traveled around the state of Bihar, one of the poorest states in India. The group of dedicated Jesuits who serve in different ways there wanted me to help them celebrate the fiftieth jubilee of their foundation. My role was to give presentations in four different settings. Most of the time I traveled by jeep, but sometimes I would travel in an ambulance because it was safer. There had been a hijacking of a bus on one of the roads we had to take, and two people were killed. But those who had invited me said that no one, not even bandits, would stop an ambulance (although I noticed that everyone in the ambulance traveling with us got quiet once we reached the turn in the road where the hijacking had occurred!).

"On one of these journeys the day after I had given a daylong workshop, we pulled into a small village where one of their schools was located. I had lunch with some of the men, took a siesta, and afterward went out to experience the beautiful afternoon sun. As I was standing there, one of the men came out to greet me. He was called 'the barefoot brother' because he kept misplacing his shoes, although I suspect the real reasons were that he liked walking without them, and each time someone bought him a new pair of shoes he would give them away.

"He asked me if I wanted to take a short walk to visit some Catholic nuns who were working in the area, and I said that I would be happy to join him. As we walked along, he inquired, 'Would it be too personal to ask you about your family?' After I told him, 'Not at all.' I described my family and then asked him about his.

"He had come from a big family. Since his father died young, he said he had to stay at home and take care of the younger children. That was why he entered the Society of Jesus so late in life. When I asked about his siblings, he told one sad tale after another about the tragedies that had befallen many of them — accidental deaths, terminal illnesses, etc. — the list seemed endless. The surprising thing was that he told it in a very matter of fact way that demonstrated acceptance of the different turns in life.

"After he had finished his story, but while we were still walking along, he stopped on the dusty road, turned to me with a smile and said, 'I must thank you before I forget.' Surprised, still in a reverie about how much this man had been through and how calm and at peace he was now, I asked, 'Why would you ever be thankful to me?' In response, he said to me with an even broader smile on his face, 'Your day of renewal yesterday truly lifted my spirits. It was so good of you to come so far to help us this way.' After he said this, I thought I was going to cry. He was thankful to me? Given all the good he was doing, the problems he had risen above, and the sense of appreciation he had for literally everything, including my small contribution, he was a gift to me.

"Entitlement is one of the greatest dangers to the spiritual life and an enemy to our sense of inner peace. The Jesuit brother had no part in such an attitude. He lived in the now and was open to all that God was giving him. In this respect, gratitude is a perfect example of that which both satisfies us and leaves us open to experience more. When we feed our souls with gratitude we can experience whatever good may come along in a myriad of ways. Brother David Steindl-Rast speaks about this in his book Gratefulness. He notes that most of us leave the house each day with a mental list of certain particular things for which we will be grateful. His advice is to discard the list and be grateful for any and all things that come our way. This alone, if we could do it, would transform our lives and be a constant source of perspective.” 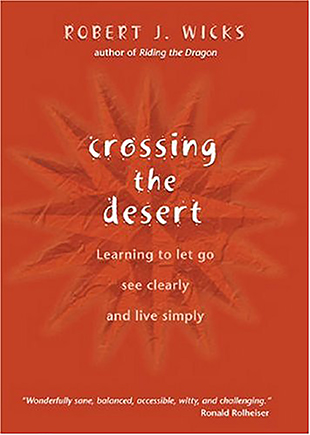