Understanding A Course in Miracles The History, Message, and Legacy of a Spiritual Path for Today

"To understand the aim of A Course in Miracles, it's necessary to grasp that it is not primarily attempting to change its students' religious beliefs, morals, or behavior in the manner of most religious teachings. Rather, the Course, which describes itself as a 'mind training,' is focused on changing the way that human consciousness typically works.

"In the simplest terms, the aim is to help students learn to let their minds be consistently inspired by love, rather than compulsively driven by fear. In Course lingo, this means learning to attune to — and accept — the everyday guidance of the 'Holy Spirit' in place of the habitual drives of the ego. (In Course terms, the Holy Spirit is essentially an ambassador of God in our own minds, because the original creative intelligence known as God is actually unaware of the illusory world we have created through our false, fear-driven perceptions.) One learns to hear and follow a different internal voice primarily through the constant application of forgiveness — to oneself, to all other people, and to the world at large. As Workbook Lesson 332 suggests, 'Fear binds the world. Forgiveness sets it free.' Forgiveness is thus the means for working miracles, as the Course defines them — and it defines them unconventionally.

"Chapter 1 of the Course Text opens with a list of fifty 'principles of miracles' that shed some light on the differences between 'Course miracles' and the kind we are accustomed to hearing about in the news or religious literature. Following are a few of the principles that help distinguish this new kind of miracle:

Miracles occur naturally as expressions of love. The real miracle is the love that inspires them. In this sense everything that comes from love is a miracle.

A miracle is a service. It is the maximal service you can render to another. It is a way of loving your neighbor as yourself. You recognize your own and your neighbor's worth simultaneously.

Miracles are natural signs of forgiveness. Through miracles you accept God's forgiveness by extending it to others.

Miracles are expressions of love, but they may not always have observable effects.

A major contribution of miracles is their strength in releasing you from your false sense of isolation, deprivation, and lack.

A miracle is never lost. It may touch many people you have not even met, and produce undreamed of changes in situations of which you are not even aware.

"One of the first conclusions that can be drawn from these principles is that ACIM does nor generally treat the miracle as a rare, spectacular event that proves the existence of God or the correctness of faith. The Course does not deny the possibility of spectacular miracles, or the capacity of human beings to produce them. In fact, it asserts that 'few appreciate the real power of the mind, and no one remains fully aware of it all the time. . . . It is hard to recognize that thought and belief combine into a power surge that can literally move mountains.' (CH2, VI, 9) But the Course is primarily interested in miracles as the optimal vehicle of relationship: miracles are 'expressions of love' and 'natural signs of forgiveness' that heal the human condition of 'isolation, deprivation and lack.'

"In this sense, ACIM is a manifesto proclaiming the democratization of miracles. They are no longer the exceptional or supernatural handiwork of saints and angels, but rather the natural if often forgotten calling of human beings. 'Forgiveness is my function as the light of the world,' Workbook Lesson 62 reminds the reader. Further, it is not dramatic demonstrations of miracle-working that matter, for miracles may not always have 'observable effects' while nonetheless producing 'undreamed of changes in situations, of which you are not aware.'

"Yet miracles are also thoughts of a particular kind, the kind that reminds Course students to view reality in spiritual rather than material terms. It is this choice of awareness, reinforced by the everyday work of forgiveness, that 'reverses the physical laws' and enables the 'sudden shifts into invisibility' that enable authentic healing. Just how much our ordinary consciousness differs from a consistent spiritual awareness is hinted at in another miracle principle: 'Miracles are natural. When they do not occur something has gone wrong.' " 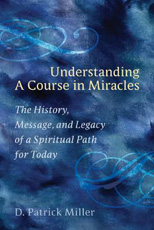