Beyond Tolerance Searching for Interfaith Understanding in America

"Back in 2000, the Hartford Institute for Religion Research, a scholarly organization that specializes in analyzing Americans' spiritual practices, undertook a sweeping study of the life of 14,000 congregations of all denominations nationwide. Among its findings, the report, 'Faith Communities Today,' stated that within the preceding year, 7 percent of American congregations had gotten together with another group of religious believers, across faith lines, and held a joint worship service; during the same period, a slightly higher number, 8 percent, said they had collaborated in a community service project with another such congregation. Proportionately, the figures may seem small — at least until one considers there are an estimated 335,000 churches in the United States, in which case the institute's findings pointed to between 20,000 and 25,000 involved in interreligious activities. But the original survey provided a baseline for a second, more intriguing one five years later. This time around, the institute reported that the number of houses of worship participating in interreligious worship had tripled to more than 22 percent, while the number that joined in community service had risen more than fourfold to 38 percent. (The increase was not evenly spread across the religious map; far more mainline Protestants and Roman Catholics reported participating in these events than did evangelical Protestants, while the greatest participation of all came from among non-Christian congregations, nearly two thirds of whom said they had joined with Christians in social service projects.)

"A cultural shift had taken place. David Roozen, who directs the institute (based within Hartford Seminary in Connecticut), said he believed at least two factors were at work. On one hand, old ecumenical networks — local organizations that brought Protestants and Catholics (and sometimes Jews) together — were reaching out to include Muslims. But even more so, he said, a mutual curiosity was bearing fruit: In a time of war, people had become more curious about one another, more determined to reach out. 'A high percentage of the United States is college educated,' Roozen said, adding that among those there were a good many people who were asking questions about what other people believed, and were finding that those others were often — not always, but often — willing to respond and might be able to meet their Christian or Jewish neighbors at a socially equally level. 'New immigrants of almost any of the faith traditions tend to be at least somewhat educated, if not very educated, partly as a result of the way immigration laws are written these days,' he said. 'And so they really are part of the mainstream of American economic life, which is where most of us spend most of our time. They are not marginal, not — to use an old term — "ghettoized," as the old immigrants were. There's a wanting to be accepted.' Given estimates like those made by Hartford, it's tempting to call these interreligious activities a movement — and some people do. But what happens tends to occur at the local level, which makes it no less important, but does leave people in one town unaware of what may be going on only a few miles down the road." 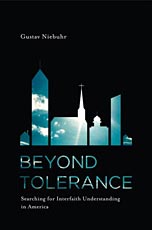