An Altar in the World A Geography of Faith

"Waiting is certainly a kind of prayer, especially if you can stand howling, wide-open spaces. Once, between the time my doctor gave me some bad news about my health and the time I was scheduled for surgery to have the bad thing cut out, I found it possible to love my life in ways that had never occurred to me before. I never thought I could value being able to walk around my house and look out all the windows. I never thought of the brickwork on the building where I worked as beautiful before, or the sound of people laughing on the sidewalk outside as welcome signs of life. I never allowed myself the time to take a bath instead of a shower, or to find out how long the hot water lasted if I were not in a hurry. Waiting, I found speechless intimacy with other people who were living in such wide-open spaces themselves. We lived in a whole different world from those who thought they were fine. We could spend fifteen minutes admiring a rose, a whole hour enjoying a meal. Even if my news had stayed bad instead of getting better, I like to think that these simple pleasures would not have lost their power to console me. They constituted an answer to my prayer for more life, even if that life turned out to be shorter than the one I thought I wanted.

"The same thing can happen while you are waiting to learn whether your child will come home, whether your marriage will last, whether the war will end, whether the market will recover. If uncertainties like these are the sort that move people to pray, then that is because they are the ones that remind us how little real sway we have. Our lives are inextricably bound up with the lives of other people. So much depends on things we can never control. A butterfly beats its wings in Beijing, making it impossible to predict the weather in New York.

"We are players, but we do not direct the play. Crucial decisions were made for us before we were even born. Did you decide to be born in Wichita? Was being a girl your first choice? Did you plan on growing up with three brothers, or none, to one parent or two? Even the decisions we make for ourselves seldom take us where we meant to go. I meant to stay married to the same person all my life. I meant to leave the South. I meant to give myself to the service of God until all my sharp edges were worn away.

"None of those things happened. Other things happened instead, many of them against my will. Some of them turned out better than I could have planned and others of them much worse. So far there is nothing that I would make un-happen, if that were within my power. While I pray daily to be delivered from the most awful things that can happen to human beings — land mines, wasting illness, killing poverty, civil wars — I give thanks for even the semi-terrible things that have happened to me, since they have shown me what is really real. They have made me tell the truth. They have quashed all my illusions of control, leaving me with no alternative but to receive my life as an unmitigated gift." 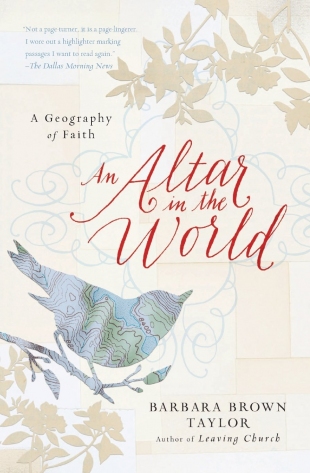