The Green Hour A Daily Dose of Nature for Happier, Healthier, Smarter Kids

"If you've ever watched a child digging on a sandy beach, collecting flowers, or building a fort made of sticks, you might agree that being completely in the moment is an inherent human capacity — and, regrettably, one that many of us lose as we grow into adulthood. Time spent in free play outdoors is a golden time when children are fully engaged — mind, body, and spirit. What might look like nothing . . . well, it really is something.

"However, children's free playtime has been on the decline for a generation, dropping 25 percent between 1981 and 1997 alone. What's filling the void? In large part, it is the rise of structured activities for children. Certainly, these organized activities, such as youth athletic programs, do have their positive aspects — especially in light of the current epidemic of childhood obesity.

"But they do not, and cannot, take the place of children's free play outdoors — those freely chosen activities that delight a child's mind, body, and senses. No less an authority than the United Nations High Commission for Human Rights, in its 1989 Convention on the Rights of the Child, recognized the right of every child to play. And the American Academy of Pediatrics describes play not only as vital to children's cognitive, physical, and social development, but also as an ideal way for parents to strengthen family bonds of affection and to serve as role models for their children. The family that plays together stays together.

"And the family that stays together stays strong. Consider the results of the Columbia University survey which found that teens who regularly participate in family dinners were more likely to do well in school and less likely to drink alcohol, smoke cigarettes, or try marijuana. The magic bullet could be nothing more than the fact that these families, even if it's only for the duration of one meal together each day, put everything else on hold to connect, to communicate, and to reaffirm for each other that first things still come first.

"In that regard, the notion of reclaiming some time for outdoor play and discovery each day — for your children, if not for your entire family — joins the swelling movement to slow down, to simplify, and to savor life: family, friends, food, culture, the wonders of the world around us. It's a commitment to live life in an authentic, meaningful way, in tune with the rhythms of our hearts, our minds, and of nature itself." 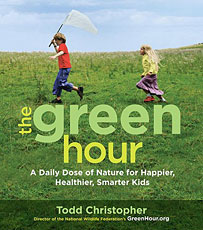