By Susan Moon
Susan Moon on how conscious aging helps us deal with the fear of missing something and brings us back to the present moment.

"The part of me that wants to lower my bucket into a deep well and draw up cool water is sabotaged by another part. I suffer from a condition that a Zen friend calls 'FOMS Syndrome' — fear of missing something. It's a form of greed — the urge to cram as many interesting activities into the day as possible, coupled with the impulse to say yes to everything. To put it more positively, I'm curious about everything and everybody. And so, when I first retired, feeling rich with time, I signed up for all sorts of activities, classes, and projects. Each separate thing I was doing was worthwhile; I loved my Spanish class and my photography class, for example. But soon I was busier than before. Where was my deep time?

"When I get too busy, old habits of mind kick in. I try to solve the problem by readjusting my schedule, which only makes it worse. I change one appointment in order to make room for another. I stare at my week-at-a glance calendar looking for white space, and when I find it, I pounce. Ah, a delicious piece of time! I write down: '2 pm — Nomad Café, plan workshop w. Jean,' and the white space is gone. Woops! No more time. Then I feel like an animal flailing around in a trap made of netting, getting more tightly bound.

"I try to measure out my time in the long run as well as the short. I'm a person who likes to count things, and I run the numbers. At sixty-six, I figure I'm about three quarters of the way through. That's if I make it to eighty-eight. How long is that? I go backward twenty-two years, to when I was studying Russian and I went on a 'citizen diplomacy' trip to the Soviet Union. Remember the Soviet Union? So I guess twenty-two years is a pretty long time — but it's all gone now, including my Russian. The next twenty-two years will go faster than the last, and besides, I might die sooner.

"Like my father, who died at seventy-three. That would mean I've already lived — wait, let me check my calculator — 90 percent of my life.

"Admittedly, sometimes it's appropriate to think about time this way — to consult the actuarial tables of the mind. I have a seventy-year-old friend who has heart trouble and other chronic health problems. She's financially stressed, and she has to make decisions about her house and her living expenses. She has to decide how soon she can max out her equity line of credit, or whether she needs to keep on working part-time. She came right out and asked her cardiologist to give her a rough estimate of her life expectancy. She told him that she had tentatively figured out financing that would get her to the age of eighty-two.

" 'You've been doing well for the last few years,' he told her. 'According to the statistics, you have a better than fifty percent chance of living to the age of eighty-seven.'

"My friend rolled her eyes. 'But I can't afford to live that long!' They both laughed, and now she's looking for more part-time work.

"Of course you can't really measure time at all. Our calibrations are like pencil marks on the ocean. Einstein taught us that time is flexible. It passes differently for a person in commuter traffic, a person centering a lump of wet clay on a potter's wheel, or, so Einstein told us, a person approaching the speed of light in a spaceship. An hour can seem like a year and a year like an hour. In the last days of my father's dying, he was in a lot of pain from cancer. He would often ask what time it was, and whatever the answer was, he would groan and say, 'Oh, no! Is that all it is?' I couldn't understand why he wanted time to hurry up, because there wasn't anything that was going to happen, except that he was going to die. I think the pain made time pass slowly, and he wanted to know that he was getting through it, from one hour to the next.

"I, too, have had times when I wanted time to hurry by. Mostly, though, time is what I want more of, and as I get older, it gets scarcer and scarcer. First of all, there's less of it in front of me than there used to be. Second, each year swings by faster than the one before. Third, I'm no good at multitasking anymore — I can only do one thing at a time. And fourth, it takes me longer to do each thing. Age is forcing me to slow down.

"I'm not the only one. There's got to be some biological reason that old people drive so slowly on the freeway. I just saw a bumper sticker that said: 'Old and Slow.'

"I remember impatiently watching my grandmother making peanut butter and jelly sandwiches for a picnic. She got the jam out of the cupboard and put it on the blue linoleum countertop, and then she walked back across the kitchen to the same cupboard for the peanut butter. It took forever. Well, not quite forever, because she did make the sandwiches, and we ate them on a plaid blanket down in the meadow.

"Here's the amazing thing: aging is giving me back the present moment. It's only linear time that's shrinking, and as it does, I have a better chance to enter deep time. It only takes a few seconds to slip through the crack between two hits of the han into a timeless garden.

"This is what zazen is all about: it's time out of time, it's stepping aside from activity and slowing down to a full stop. While I'm sitting zazen, even if my monkey mind is swinging wildly from branch to branch, at least I'm not accomplishing anything useful. As the Heart Sutra says, 'There is no attainment, with nothing to attain.'

"It's easy to get nothing done while sitting zazen; a person of any age can do it. But now that I'm getting older, I'm learning to accomplish practically nothing in the rest of my day as well. If the trend continues, my next-door neighbor will think I'm doing standing meditation in the back yard when I'm actually taking in the laundry.

"I like to bury my face in the sunny smell of the sheet on the line before I take it down. I like the slow squeak of the line through the rusty pulley as I haul in another sweet pillowcase. The laundry lines of my childhood made exactly that noise." 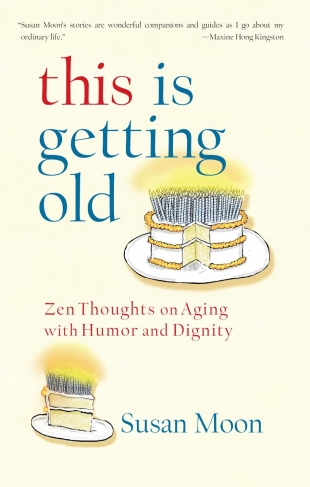