By John Kralik
John Kralik on responding to the one good thing a person did for you in your thank you note.

How to Write Thank-You Notes

"I knew at some point I would need to do some research on the proper way to write a thank-you note. So I thought I would write out my own notions of thank-you note writing at the beginning, before they were colored by the formulas of conventional wisdom.

"A couple things were clear to me from the get-go. You ought to mention the gift itself, hopefully in a positive tone, just to prove you know what it is and aren't confusing the gift giver with someone else. Then maybe a sentence or two explaining how the gift is changing your life — if anything plausible could be said in that regard. Then maybe there is something you had forgotten to thank the person for in the past, or you could mention the importance of his or her friendship.

"Many of my notes were not about material gifts. In these notes, I tried to describe just what the other person had done for me and to show my understanding of that person's effort. I started to recognize that people were doing things because they cared and to praise that care for what it was — a rare vestige of human goodness. I tried to show an understanding of their special nature and effort. This was part of my shift of focus from the gift to the giver.

"If the recipient had a sense of humor, I thought, perhaps I might try to end with some attempt at humor. I was very uncertain as to that tactic. If the joke fell flat, you had to start a new note. I used small three-by-five cards: there was no space for a setup to get the tone right. I didn't want to use a big card because the exercise was not to write thank-you letters, just thank-you notes. I decided that, for the most part, humor was not going to work for me.

"The brevity of a small card isolates your gratitude from your other more complex, and less admirable, thoughts. Unlike the potential boundlessness of e-mail, there is no room for qualification, for responding to every other aspect of that person's recent behavior and communications. There is only room to focus on the one good thing that person just did for you, and your gratitude for that one good thing. For this one moment and this one communication, all else is left aside." 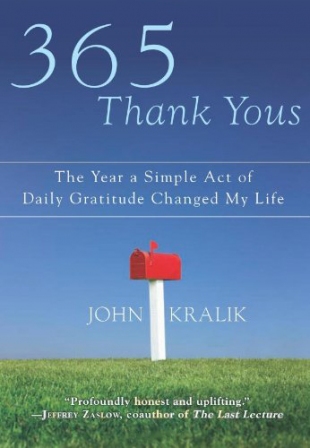