Scholar Warrior An Introduction to the Tao in Everyday Life

"The early sages postulated Tao as the ultimate nature of all things, and this is still the best starting point for understanding Taoist philosophy. Tao is of a scope more vast than our imaginations can conceive. It is in the space between heaven and earth, is heaven and earth itself. It preceded all things and will last far beyond the disintegration of our world. It is as close to absolute and eternal as we can imagine.

"We may speculate about the Tao, give it elaborate descriptions, but the images we employ are merely metaphors. The ultimate nature of Tao itself is not possible for us to grasp because our minds are inherently dualistic. We are children of beauty and ugliness; we dwell in the midst of contrasts and extremes. When given the choice between the nameless and the nameable, we gravitate toward what we can identify. The Tao, however, is both nameless (nonbeing) and named (being). Within the depths of Tao, existence and nonexistence come together; no distinctions exist. Time becomes circular or even irrelevant. Our minds cannot function in such a realm. We cannot see where there is no contrast. We cannot know white without black, upper without lower, left without right. In Tao, both white and black stand in the same place. This is why Tao is elusive, indescribable, nameless — strangely colorless and flavorless.

"It is precisely this confounding area where duality is neutralized that Taoism most enjoys. Taoists call this paradoxical mystery the nameless. They say it is the nameless that gives birth to the named (meaning all things conceivable, hence all things dualistic). All things come from Tao the nondualistic. Tao gave birth to us, surrounds us, nurtures us, supports us. It is the mother of all life, not in the sense of some mythical goddess, but as the summation of all the life-giving processes in the universe. The entire universe, with its explosions, its deaths and births of stars, its evolution, its expansion and contraction — all things from the most distant points in infinity to the very point of our own hearts share Tao as mother.

"Tao is not a substance. It is all substances. Tao is not space, but it encompasses all spaces. Nothing changes or moves without Tao. Tao is something active, moving. Tao is process, a tremendous expansion and contraction, a constant tide between existence and nonexistence. Yet, though it moves, its movement is not something tangible like the wind. With the wind, we can say that there is something there. We can feel the breeze; we can examine dust particles in the stream of air; we can measure changes in temperature. Nor is the movement of Tao exactly like water. We can touch the cool liquid, see the glimmering stream, measure the volume of its flow. But Tao is much more than that.

"Think back to the Taoist statement that the nameless gave birth to the named. What is nameless has no duality, for it cannot be defined. Anything with duality must be tangible and understandable; all tangibility has causes and origins. Whatever has an origin cannot be absolute, for there is always something preceding it. Only that which has no dualism has no origins, and so may be considered absolute. The Taoists call this absoluteness emptiness.

"This may seem contradictory. How can we conceive of anything real as being empty? But this is precisely what the Taoists assert. In fact, they value emptiness highly. They assure us that emptiness is positive, productive, and nurturing, and they use concrete images to help us understand this point." 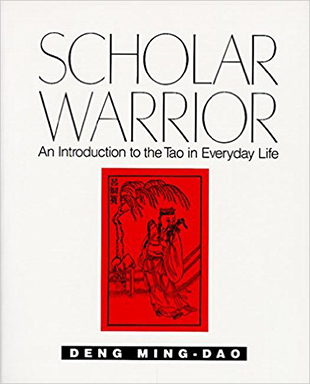