"About three-fourths of all young heterosexual and homosexual couples, up to the age of thirty-five, hold hands. Yet after thirty-five, just over half of couples in every age group still hold hands. And the longer a couple has been together, the less likely they are to link hands.

"Most couples hold hands often in their first five years together, but things start to change around year six. That drop-off is significant (11%) but not as dramatic as the plunge after ten or more years, when more than half of couples no longer hold hands. These people are letting go of a valuable way to bond, repair, and communicate support and affection.

"If you doubt this, consider the now classic study conducted at the University of North Carolina, in which researchers put two random groups of couples in different rooms and wired them up with heart monitors and other medical devices to gauge the benefits of hand-holding. The only difference between the two groups was that one set of couples was told to hold hands while working through an argument and the others were seated individually. The couples holding hands showed much less mental and physical stress (even lowered blood pressure). This suggests that hand contact could be especially important when a serious dispute arises. But don't wait for a crisis; make hand-holding part of your normal now." 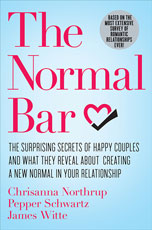