"When left on autopilot, the Turtle and Hailstorm will drive each other CRAZY. But the wonder of it all is that Turtles and Hailstorms almost always marry each other. Sometimes it's very clear which is the Turtle and which is the Hailstorm. For others, it may not be so obvious until issues arise. Like powerful magnets, these opposite energies are passionately and hopelessly drawn to each other. This is true for every couple we've ever met — and true for Helen (the Hailstorm) and me (the Turtle) as well.

"When I am facing a stressful situation, I need time alone to process the issue. This is how insights come to me. When facing the same issue, Helen processes outwardly by talking through her feelings. She looks at the situation from one vantage point, then another, and another, and processes them all with me before settling on one.

"Much of the time, we found ways to accommodate both styles. But when I became overloaded, I needed to withdraw. This drove Helen nuts! She felt that I disappeared. So her Hailstorm would wake up and start hailing to get my attention. This did not help me one bit!

"Helen began to see that the harder she hailed, the more I withdrew. The idea of backing off was challenging for her. One day Helen had a flash of insight. She loves to needlepoint, and decided that whenever she felt me withdraw, she'd start a needlepoint project. This would give her something to focus on (instead of me), which would make it easier for her to back off and give me the time I needed.

"Now that she's learned to channel her energy this way, she gets a fully restored and resourceful partner for problem solving. And she gets a grateful one too. I really appreciate that she's learned to respect that I need space before I can re-engage with my best self. (And our kids and grandkids have also benefited — because each of them now has a gorgeous needlepoint Christmas stocking!)

"Like the trick of Romantic Love, Turtle/Hailstorm physics are a law of nature. It always works exactly like this: The deeper a Turtle withdraws into its shell, the more a Hailstorm will hail. The more the Hailstorm hails, the deeper the Turtle withdraws. . . .

"So if driving each other crazy is the worst-case scenario, what's the best-case scenario? It's when the Turtle and Hailstorm learn how to dance together. And they do this by teaching each other what they know best. Turtles need to learn how to push their energy out and 'show up.' This means expressing themselves out loud and clearly, like the Hailstorm does. And Hailstorms need to learn the Turtle's wisdom of stepping back and containing their energy. This exchange helps each one gain important skills — and (dare we say) become more like the other.

"Although our incompatibility is largely what draws us to our partner (unconsciously, of course), ironically, both partners need to learn how to be more like each other. And this includes those parts they find most annoying!

"As the Turtle becomes more storm-like, and the Hailstorm becomes more turtle-like, balance is restored. In addition, these newly cultivated skills help each of you become better human beings in the world.

"It's amazing to realize that we hold the key to how much our Turtle withdraws and how hard our Hailstorm hails. Working with this incompatibility helps us heal each other's childhood wounds. Giving our partner what they need grows new qualities within ourselves, which helps us build psychological and emotional strength. That we can do this for each other — acting as both catalysts and companions on this journey — is the true mystery and miracle of love relationships." 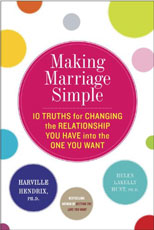