Citizen of the World Suffering and Solidarity in the 21st Century

By Donald H. Dunson, James A. Dunson
Donald Dunson and James Dunson on discovering an ethical appeal in the face of the other.

"Though humanity was born in Africa, its people today are young. In the majority of Africa's fifty-four nations, half of the entire population is under fifteen years old. While remaining spirited and spontaneous, there is still a vacant and detached look in the eyes of these children that so often accompanies hunger. Millions of Africa's young people do not sense that they are in any way important to the future of humanity. An untold number have been told subtly that they have no room at the table. They have been erroneously led to believe that their future is to die young and be quickly forgotten. They sense that there is not food enough, medicine enough, or love enough for all humanity to share, and that, regrettably, some must go without. No child of God should ever be deceived in this way.

"No matter where my travels lead me I can predict the most compelling sights I am likely to see — all in the faces of the people I encounter. The French philosopher Emmanuel Levinas spent his entire lifetime developing what has come to be called a 'philosophy of the face.' Levinas proposes that there is an ethical appeal that we discover only in the face of the other. Its demand is immediately and intuitively known. In gazing upon the face of the other we can discover the radical unity that exists within our one human family. The other's face is not an object merely to see, but pure expression: defenseless and revealing. Levinas speaks of the face of the other who is widow, orphan, and stranger. Each one of these lacks something essential: spouse, parents, home. Indeed, we are all incomplete. Something is lacking in each one of us, and our completion is bound up in our discovery of another." 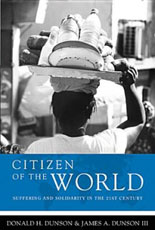