The Divide American Injustice in the Age of the Wealth Gap

By Matt Taibbi
Matt Taibbi on how Americans have become accustomed to some people having more rights than others.

"After the Boston marathon bombings, there was briefly a controversy where we wondered aloud whether the Chechen suspects would be read Miranda rights upon capture. No matter how angry you were about those bombings — and as a Boston native, I wanted whoever was responsible thrown in the deepest hole we have — it was a fascinating moment in our history. It was the first time when we actually weren't sure if an American criminal suspect would get full access to due process of law. Even on television, the blow-dried talking heads didn't know the answer. We had to think about it.

"Of course, on the other end of the spectrum are the titans of business, the top executives at companies like Goldman and Chase and GlaxoSmithKline, men and women who essentially as a matter of policy now will never see the inside of a courtroom, almost no matter what crimes they may have committed in the course of their business. This is obviously an outrage, and the few Americans who paid close attention to news stories like the deferred prosecution of HSBC for laundering drug money, or the nonprosecution of the Swiss bank UBS for fixing interest rates, were beside themselves with anger over the unfairness of it all. "

"But the truly dark thing about those stories is that somewhere far beneath the intellect, on a gut level, those who were paying attention understood why those stories panned out the way they did. Just as we very quickly learned to accept the idea that America now tortures and assassinates certain foreigners (and perhaps the odd American or three) as a matter of routine, and have stopped marching on Washington to protest the fact that these things are done in our names, we've also learned to accept the implicit idea that some people have simply more rights than others. Some people go to jail, and others just don't. And we all get it." 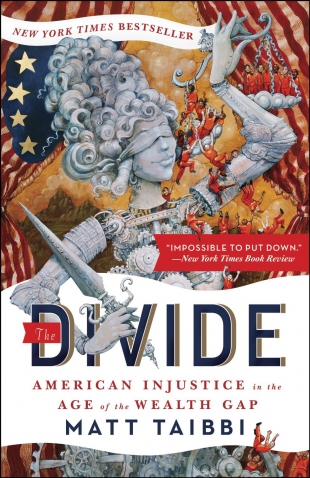