Crucified People The Suffering of the Tortured in Today's World

By John Neafsey
The invisible wounds of emotional and spiritual pain experienced by torture victims.

"Whether or not torture results in serious bodily injury, it always causes invisible wounds to the mind and spirit. Such injuries can be very deep, making it hard to tell where emotional pain leaves off and spiritual pain begins. Torture is a heartbreaking experience, but on a deeper level it can break the spirit, potentially leading to a loss of faith in God, humanity, and the world.

"The humiliation and indignity of torture can profoundly undermine the self-esteem of the survivor. People who are treated poorly usually end up feeling poorly about themselves; those who are disrespected are at risk of losing self-respect. They are also at risk for developing deeper problems on the level of the soul. 'One of the most blasphemous consequences of injustice and prejudice,' says Desmond Tutu, 'is that it can make a child of God doubt that he or she is a child of God.' In Horrendous Evils and the Goodness of God Marilyn McCord Adams describes the sense of damage and defilement at the core of a person's being that can result from being subjected to extreme cruelty. The destructive power of such experiences, she says, reaches 'into the deep structure of the person's frameworks for meaning-making, seemingly to defeat the individual's value as a person, to degrade him/her to subhuman status.' One feels less than human, less worthy of the respect that is owed to a child of God.

"Torture undermines the foundations of security and trust that the world can be counted on to be a reasonably safe and decent place. 'The sense of safety in the world, or basic trust, is acquired in earliest life,' writes Judith Herman. 'It forms the basis of all systems of relationship and faith. The original experience of care makes it possible for human beings to envisage a world in which they belong, a world hospitable to human life.' Torture, the antithesis of care and hospitality, shatters this sense of basic trust. 'Whoever has succumbed to torture,' writes Amery, 'can no longer feel at home in the world.'

"The emotional pain of torture survivors originates in the terror and powerlessness they experienced when they were at the mercy of their torturers. 'Psychological trauma is an affliction of the powerless,' says Herman. 'At the moment of trauma, the victim is rendered helpless by overwhelming force.' There is no way to escape, no way to defend oneself or fight back. 'Traumatic reactions occur when action is of no avail. When neither resistance nor escape is possible, the human system of self-defense becomes overwhelmed and disorganized.' Anxiety and horror take over.

"Every torture survivor is a unique individual with particular strengths and vulnerabilities, and so survivors do not always fit neatly into diagnostic categories like PTSD. Most, however, do report painful inner experiences that resemble at least some of the classic symptoms of PTSD. These fall into three general categories: (1) persistent anxiety and expectation of danger (hyperarousal); (2) disturbing memories and reexperiencing of traumatic events (intrusion); and (3) emotional numbing, a diminished capacity to feel as a way to cope with unbearable feelings (constriction)." 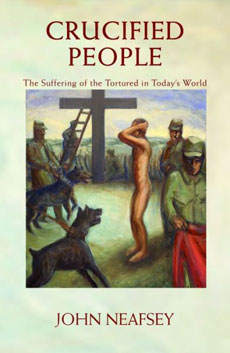