All the Wild That Remains Edward Abbey, Wallace Stegner, and the American West

By David Gessner
Good reasons to read Edward Abbey as an antidote to the virtual world.

"It is not ideas that we remember Edward Abbey for. Nor does he share with [Wallace] Stegner the burden of living up to some paragon of moral virtue. He is a man known as much for his faults as his virtues. If ever a writer had feet of clay, here he is. Abbey suffers from both excessive criticism — from those who see him as sexist, racist, xenophobic — and excessive love, from those members of what Luis Urrea called 'the Abbeyite Order,' those who revere the externals: the flannel shirts, the trucks, the beer-swilling, the monkeywrenching. But while we are swinging between the extremes of love and hate, we might remember that this was a writer who created at least one great book. And here was a man who, for all his flaws, showed through his example what it meant to live a counterlife, a life where the love of wildness really mattered and where one's priorities grew out of that love. He shared with Thoreau the conviction that our society is full of dry rot, and a belief that much of what the world considers good is truly bad. If you really believe this, it is not just foolish but immoral to live in the way that a rotten society tells you to live. And how did society tell you to live? A successful life, a prosperous life, a life of progress, of achievement, of getting bigger. It took a strong person to say, Hey, wait a minute. Abbey agreed with Thoreau that there were good lives other than those that most of us call successful. Some might see something adolescent in this rebellion against the way things are. But going against and staying against requires a deep bravery, a ballsiness, a commitment.

"Finally, there is this: I can't think of a better antidote to our virtual age than a strong dose of Edward Abbey. He is a writer who speaks of things that are now in short supply. In an age of security and surveillance, he speaks of independence and freedom. In an age of ever-increasing computerization and industrialization, he speaks of the world and the Earth. In an age of the tame and the virtual, he speaks of the wild and the real. He loved life — this comes right through the page — and he loved the physical world. And he is still alive to us. Take October 5,1962, for instance, just yesterday it seems, when he wrote in his journal:

"Early morning snow falling in the desert — the bright vast land — coffee and hotcakes on the stove — all around golden silence spangled by bird cries — the feeling of something splendid about to occur — a setting for visions, pageants, dreams, cavalry battles — Balanced Rock at Arches, snow covered mountains beyond me and me squatting on sandstone in the clean chill air, coffee cup in hand, sun blazing down on snow already beginning to melt from juniper, cliffrose, dead pine, pinnacle, ramada — brief bliss." 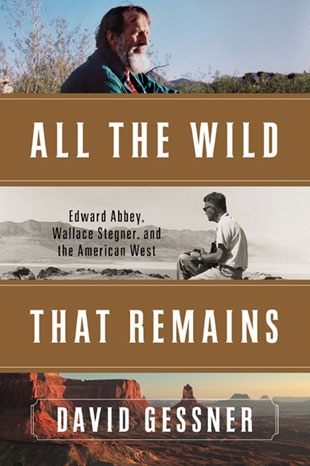