By Pico Iyer
Pico Iyer on life's impermanence and the joy of simple pleasures like attending a concert.

"The yin-yang earrings that Hiroko wore the first time I visited her house were the first thing I noticed: no black-and-white in Japan, since every end marks a fresh beginning, and in every forgetful love, there's an urgency born of the sense that nothing lasts forever.

" 'You remember the story Fukushima-roshi told us the final time we saw him?'

"Our Zen master friend had found himself in New York City, on one of his final tours to teach Zen practice across the New World, and he'd heard that his near-secret fifth attachment, Joan Baez, was appearing at Town Hall.

"The concert was sold out, but he sent some of his monastic attendants out onto Forty-third Street to scalp some tickets. Pulling wads of cash out of their robes, they'd managed to score four seats, quite close to the stage, in the very center.

"That night, when the singer, close to seventy, delivered her rich soprano rendition of 'Where Have All the Flowers Gone?' and 'Forever Young,' it was to see three Japanese monks in full black robes flapping up and down in front of her, dizzy with delight and relief. At their center was a small, shaven-headed figure in thick golden robes, visibly transported, not long before Parkinson's rendered his smallest move impossible.

" 'Though the years are sad,' I read this morning on our terrace in the sun, on the last page of Edith Wharton's autobiography, 'the days have a way of being jubilant.' " 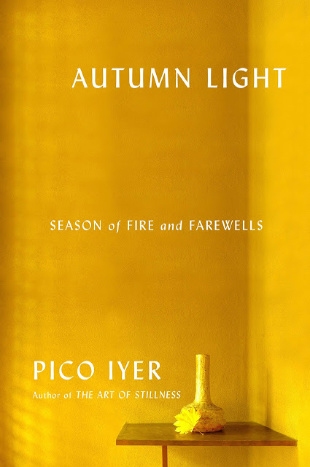