A Year of Pagan Prayer A Sourcebook of Poems, Hymns, and Invocations from Four Thousand Years of Pagan History

By Barbara Nolan
An introduction to the Feast of Jove with an accompanying Homeric hymn.

September 13: The Feast of Jove, Part I

“Jove or Juniper, the Roman equivalent of the Greek Zeus, is the king of the gods and Lord of Thunder. As husband, father, son, and brother, this ancient sky god creates and oversees relationships within the family of the gods; as the god who freed his Olympian brothers and sisters from eternal imprisonment in the body of their murderous father, he is acknowledged as their leader. In keeping with his royal status, he was given a spectacular ritual feast in his temple at Rome every September (which, after the ceremonies were over, would be eaten by the priests and distributed to the poor). A second, smaller feast was celebrated in his honor in November.

“Today would be a good day to make a donation to a soup kitchen or throw a party in honor of Zeus, but the following collection of poems and prayers will allow you to fete the god with words as well as food.”

“Themis is the goddess of justice and divine law; her name is closely related to the Sanskrit word dharma. Zeus is the son of the Titan Cronos.

'I will sing of Zeus, chiefest among the gods and greatest, all-seeing, the lord of all, the fulfiller who whispers words of wisdom to Themis as she sits leaning towards him. 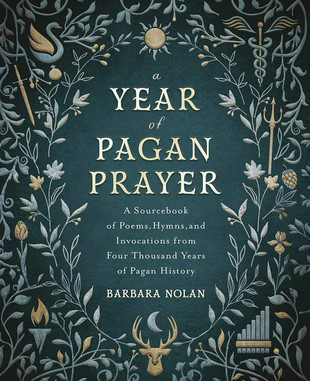