When I Found Grandma

By Saumiya Balasubramaniam
A multigenerational story about overcoming differences and discovering love.

Maya's grandmother lives thousands of miles away and sends her postcards, though Maya wishes she could pick her up from school like her friend's grandmother does. Then she receives a surprise in a crimson sari: Grandma has come to visit, bearing homemade sweets.

The sweets do not appeal to Maya nearly as much as cupcakes, and so begins an uneven relationship between her and Grandma. Maya is embarrassed when Grandma comes to her classroom with her glass bangles jingling. She hates it when Grandma calls her by her full name, Mayalakshmi. She doesn't like the cashews that Grandma adds to their family dinner. After Grandma's prayer bells wake her up, she waits until Grandma takes a long shower and then hides them under the bed.

But the worst part is when spring break arrives and Maya can't wait because Father promised a trip to an island with a carousel. Instead, she finds her parents and grandmother dressed in white to go to a festival at the temple. We see her stunned expression, her dash back up the stairs, and her furious kick.

But here the story turns around, because it's grandma who realizes how desperately disappointed Maya is and who with patient understanding tells her, "We could pray on the island." Grandma borrows American clothes and buys an all-American baseball cap. And when Maya gets lost in the crowd, who has the perfect way to find her again?

Balasubramamiam has a gift for bringing realistic childhood situations alive and for threads of symmetry: Grandma's Indian dress and her American dress, the prayer bells that bug Maya and later become an important remembrance tool for her. So it's no surprise that the manuscript for When I Found Grandma, the author's debut picture book, was a finalist in the Writing for Children Competition held by the Canadian Society of Children's Authors, Illustrators, and Performers and The Writers' Union of Canada.

Artist Qin Leng grew up surrounded by paintings and has won numerous awards for her animated shorts films and art work. The care she has taken to understand the characters in this story in all their confusion, reorientation, and growing affection radiates from every page. This book will especially appeal to 4-7 year olds — and of course the grandparents and other caregivers who get to share this treasure of a story with them. 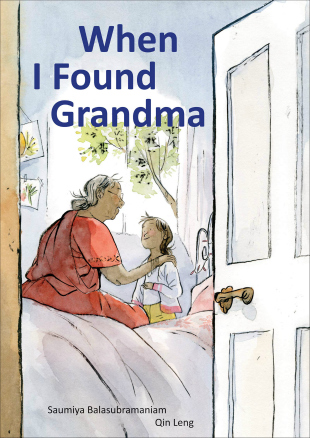