The Biggest Puddle in the World

By Mark Lee
A three-day downpour leads two young children to explore where water comes from and where it goes.

Sarah and her younger brother Charlie get to spend six days with their grandparents. For the first half of their trip, they turn to purely indoor play as rain pours down. Sarah asks her grandfather where the rain comes from. He promises to show her after the rain passes, "But first we'll have to find the biggest puddle in the world."

When sunlight reappears on the fourth day, Sarah, Charlie, their grandfather, and Keeper the dog set out exploring. Nathalie Dion's illustrations — which up until now have shown us charming indoor details like dress-up in oversized clothes with a mirror held out so that Keeper can see how charming he looks with bows in his fur — take on the expansive quality of childhood nature vistas. Even little puddles excite the children, but they keep aiming bigger until they are following streams that lead to ponds. When they learn that a bit of water that disappers from a rock has evaporated to help form clouds in the sky, they are all the more eager to run down the path which leads, as you probably guessed, to the ocean.

We're glad we don't have to decide what's more impressive: This down-to-earth way to demonstrate water cycles or the creative caring of the grandfather who lets his grandchildren make their own discoveries. As the children kick up spray at the ocean's edge, we see their grandfather keeping just enough distance to make sure they're safe and to let them expand their world. Our eyes travel with awe from the tiny boots on the shore to the distant watery horizon.

Mark Lee has been a writer for the past forty years, working as a journalist, playwright, screenwriter, novelist, and children's book author. He lives in New York City and likes to fly kites in Central Park, where he no doubt has plenty of chances to deepen his understanding of four to seven year olds' appreciation of nature's marvels. 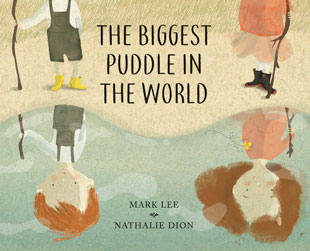