By Annika Dunklee
An appealing story for cooped-up children about an older boy's change of heart toward his tag-along little brother.

By the time you're old enough to read this review, you probably know at least one family in which a younger brother idolizes an older one, while the feeling isn't exactly reciprocated. Such is the case for Edgar, who loves to play with his older brother William, while William periodically has enough of Edgar.

The words and illustrations to back up this theme are adorable and sometimes — at least to anyone who has cared for young children — amusing in their accuracy. For instance, Edgar asks, "You wanna play monster truck smash-up, William?" while tugging on William's shirt as the older boy tries to run away, shouting "No!"

Fortunately, William has a get-away: his very own hot air balloon, where Edgar never comes. We start getting clues early on that this hot-air balloon just might be something else; on the stabilizing ropes, pajama bottoms join the colorful pennants, and William climbs the ladder to the basket in his stocking feet. But Edgar's inability to follow is real, and that's what counts.

Then one day when William ascends into the balloon, Edgar calls out, "Wait for me!" He then immediately pivots into panic, remembering everything he ought to bring for comfort: a sandwich, a sippy bottle, a yo-yo, and Mr. Bibbles, his stuffed monkey. Somehow this behavior triggers the best in William, who starts to encourage Edgar … but can Edgar make it up the ladder into (you guessed it) the top bunk?

We can hardly think of a more believable and appealing story for cooped-up children trying and sometimes failing to be patient with each other. Children ages 3 - 7 will especially enjoy this book. 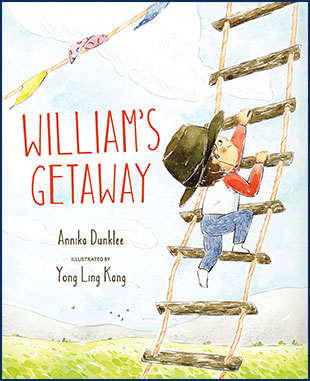