By His Holiness The Dalai Lama
An autobiography of the Dalai Lama's growth in compassion.

One of the best ways to introduce a child to His Holiness the Dalai Lama — the highest spiritual leader of Tibet and a world-renowned peacemaker — is through the curiosity that comes naturally to the young. What was the Dalai Lama like as a child? Was he ever mischievous? How did he learn about being compassionate?

In an introductory letter to The Seed of Compassion, the Dalai Lama writes that it brings him great joy to share the story of his life with his young brothers and sisters. You can tell from the very first page that he understands the kinds of things they'd want to know about his life.

Bau Luu's soothing illustrations, in earth tones with bright adornment of prayer flags and maroon robes, bring the Dalai Lama's story to life even before the first word. While most of us know the Dalai Lama's early life from black-and-white photos of his escape to India during the 1959 Tibetan uprising, here we get to see the gentle lives of farmers in northeastern Tibet, his birthplace.

From the time he was very young, the boy — who was not yet known to be the Dalai Lama — lived with his family, who sowed barley, buckwheat, and potatoes. But in addition, he explains, his mother raised him on a different kind of seeds: seeds of compassion, "a diet of love." She gave food to neighbors in need in time of famine, and she always treated her son with kindness ... even when he was naughty.

The images here, both in pictures and words, are absolutely charming. Imagine His Holiness riding on his mother's shoulders, tugging on one of her ears to tell her which way he wants to go and kicking his legs if she ignores his directions! Even when, at age four, he passes a series of tests which show he's the new Dalai Lama, he doesn't instantly transform from being a kid. He and his brother roughhouse so rambunctiously inside the palanquin transporting them to India that they keep knocking it off balance and have to be separated for the rest of the journey.

These details help children understand that the Dalai Lama, like other spiritual leaders, grew into his duties and passions. When he writes about making the world a more compassionate place and observes that "this ability is within every one of us" — strongest, he believes, in children — they begin to recognize that just because they have some rough edges doesn't mean they cannot become more and more caring human beings. The Dalai Lama likens this process to young plant sprouts "that must be tended until they grow strong and thrive."

Four to eight year olds will especially enjoy this book, but we can all benefit from hearing the Dalai Lama's story and his teachings. This book will leave children and anyone who reads it to them with an important reminder: By watering the seeds of compassion that otherwise remain dormant in us, we can bring joy to ourselves and others. 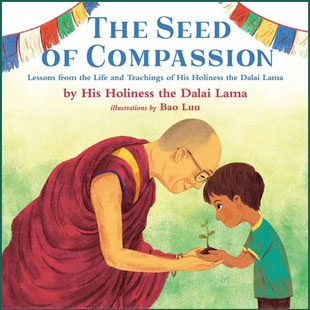