The Fish Who Found the Sea

By Alan Watts
A parable about trusting ourselves to our true element.

Alan Watts — the 20th-century British writer and speaker who introduced millions of Westerners to Eastern religions — primarily cultivated an adult audience. So it's a delight to learn from his daughters, Joan and Anne Watts, that he used to regale them with "imaginative stories, limericks, and nonsense poems."

They explain in a postscript that he wrote the parable The Fish Who Found the Sea while he was an Anglican priest and chaplain in the mid-1940s. Over the years, he had it published in various periodicals and as an essay in his book Cloud-Hidden, Whereabouts Unknown. Sounds True now brings us this picture-book edition, the first of its kind. It is brightly and whimsically illustrated by Khoa Le, an award-winning graphic designer and painter based in Vietnam.

Watts' story begins with an ordinary fish who has never known anything except the Great Sea in which he swims — so he's not even aware that he's moving through water. "Without it he could neither swim nor live," writes Watts, in an echo of the biblical line that tells us we "live and move and have our being" in the Divine. The fish even considers himself clever for being able to move "in the midst of nothing at all." Khoa Le captures the humor of this attitude, showing the fish with mouth open wide in a kind of dazed astonishment at his own perceived prowess.

With increased awareness comes growing perplexity, as the fish becomes suddenly terrified that he might forget how to swim and plunge into the depths. He starts doing everything in his power to make sure that doesn't happen, even trying to hold himself up by taking his own tail in his mouth, which leads to him whizzing around in circles!

What makes the story so heartwarming is the sympathetic element that Watts introduces as the Great Sea watches this behavior "with mixed feelings of amusement and sorrow." Eventually the fish and the Great Sea strike up a conversation, and we as readers get to witness a gradual dawning of the fish's vaster perspective.

Intended for children ages four to eight, this book makes an excellent introduction to Eastern philosophy and to Watts. His daughters, in a spirit their father would surely appreciate, close their postscript with this blessing: "May you, like the little fish, dance always in the joy of your true element." 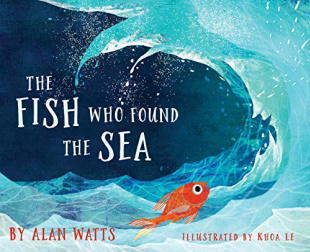