By Robert Burleigh
A richly sensory and meditative book inspired by the artist's time on the rocky shores of Prouts Neck, Maine.

Winslow Homer (1836 - 1910) was regarded by many as the foremost 19th-century American painter. The powerfully expressive seascapes that he painted late in life from his coastal studio house in Prouts Neck, Maine are the subject of this book.

The book begins with winter and runs through the seasons to winter's return. This gives rhythm to the book, which is not so much a story with a plot as it is an exploration of the artist's creative process.

Author Robert Burleigh, who has written a number of bestselling children's books that have received multiple starred reviews and awards, keeps a steady dance throughout the pages of seasonal and sensory details ("Splash! Sea spray flying up into mist! Look!") and descriptions of artistic creation ("With a firm hand he adds a bit of green.").

Illustrator Wendell Minor, who has his own gift of conveying the sea's changing moods, portrays him standing boldly on the rocky coast, framed by the breaking surf rising up from below. He conveys the steadiness of Homer's concentration and determination to capture what he sees. When he shows us Homer indoors — paint palette in his left hand and brush in his right touching the canvas — we feel almost as though the artist is touching a view out a window.

Woven into the pages are many of Winslow Homer's own quotes. They were among our favorite parts of the book, often reflecting spiritual practices; for instance, gratitude, beauty, peace, and attention:

The life that I have chosen gives me my full hours of enjoyment ...
The Sun will not rise, or set, without my notice and thanks.

Look at nature, work independently, and solve your own problems.

The five "More about Winslow Homer" pages at the book's end are not to be missed. They include reproductions of several Homer paintings, a photo of the artist at his easel, the backstory on how he became a great painter, a description of the historical significance of Prouts Neck, a bibliography, and places to go to online to see Homer's work. In these pages as throughout the book, Burleigh's enthusiasm for his subject is infectious; for instance, he writes:

"Winslow sometimes promoted his image as 'the hermit of Prouts Neck' by erecting signs outside of his studio or near where he was working to keep people away. The signs said things like 'SNAKES! SNAKES! MICE!' or 'Mr. Homer is Not at Home.' But that was only one side of his personality."

Any four-to-eight year old child — especially one with artistic inclinations — would be delighted to own this book. And anyone who loves Winslow Homer's works should abandon all considerations of age and bring this book home as a treasure to savor. 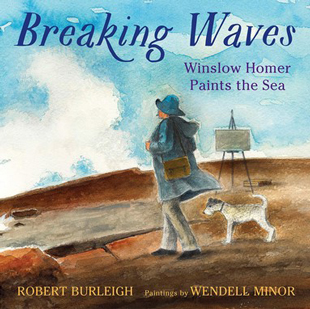