By Pablo Bernasconi
A thought-provoking and visually fascinating exploration of what lies beyond knowing.

Pablo Bernasconi, an Argentinian graphic designer and award-winning author/illustrator of 16 books, has given us a slim volume that belongs on the same shelf with Antoine de Saint-Exupéry's The Little Prince and Charlie Mackesy's The Boy, the Mole, the Fox, and the Horse. In addition to intellectual chops, Bernasconi's work has heart and soul, readily recognized when you know that he is an ongoing collaboration with the human rights organization Grandmothers of the Plaza de Mayo for their design and graphics projects. His wisdom has an existential vigor that rings true to both the tragedies and the joys of life.

Take, for instance, his choice of an opening quote, from William Shakespeare's Hamlet:

"I could be bounded
in a nutshell,
and count myself
a King
of infinite space."

Is this delusion, that Hamlet envisions counting himself such a King? Or is it vision, because he knows that even when he is externally constrained, his imagination remains boundless?

Many of the book's short descriptions of infinity carry this kind of tipping-point of possibilities. Infinity is, for instance:

"... a grain of sand
lost in a desert somewhere in the world
that contains
an engraved map
for finding yourself."

That sounds like a recipe for existential despair, until you realize that if you're searching, the grain with the map could at any moment appear, an essential touch-point in the infinite sea of sand. And then there's the illustration of a leather-bound book that's sprouted smokestacks and turned into a boat, sailing away from a tiny, kneeling figure:

"[Infinity is]
abandoning a book
just before the part
that would have changed our lives."

That's a simply devastating thought ... until you consider that, by knowing this possible danger, you may not set aside any book quite as quickly as you would have done before. And so you might reach the life-changing part.

And some of the comparisons carry pure sweetness. Infinity is "a dreaming angel." And it's "a happy ending that repeats itself over and over, and over and over ..."

So half the charm of this book lies in these engrossing koans. The other half lies in Bernasconi's brilliance as a graphic designer. Who else would create a dragon's head from a cob of corn or show the infinity of an artist's eye on the verge of creation as countless colored pencil tips surrounding a circle of starry universe with one more pencil tip at the very center? Who else would fill such a book with formulas and equations of infinity, or offer on each text page symbols that are by turns scientific, mathematical, personal, mystical, and mythical?

You can get more of a feel for this fascinating book by watching the trailer below for the original version, el Infinito, which won the Grand Prize from the Asociación de Literatura Infantil y Juvenil de la Argentina (ALIJA) in 2018. This book would make an outstanding gift to a questing nine year old, an angsty teenager, your best friend, or yourself. Quite possibly it holds infinity to ponder ... if infinity can ever be held. 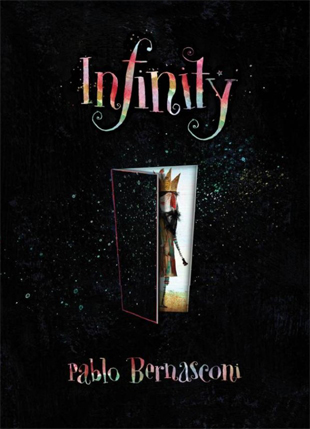