By Patricia MacLachlan
A tender story of a birdwatcher whose love of birds and life helps his grandchildren understand his passing.

Patricia MacLachlan is the celebrated author of many timeless novels for young readers, including Newbery Medal winner Sarah, Plain and Tall; Word After Word After Word; Kindred Souls; The Truth of Me; The Poet’s Dog; and My Father’s Words. She is also the author of countless beloved picture books, and this recent addition to her oeuvre does not disappoint.

Told in first person by a granddaughter named Emma, When Grandfather Flew introduces us to an avid birdwatcher eager to share his passion for feathered creatures with his grandchildren. MacLachlan builds the story arc gently and meticulously with foreshadowing lines like:

"When we were younger —
before his hair turned white
and when he could still see —
my older brother, Aidan, and I
called him 'birdman.' "

So from the second page forward, we know in a quiet way that this grandfather will begin to show the wear-and-tear of age, but the suggestion is so subtle that it's almost overlooked in the flow of a first reading. We soon discover that the youngest brother in the family, Milo, sees what Grandfather sees and listens to what he says — especially his bird descriptions — even though Milo himself isn't much of a talker.

As the story gradually shifts into one about Grandfather's decline and passing, it's a variation on these words — expressed to everyone's surprise by Milo — that let us know all is well. Every element of Grandfather's latter days, right through to the end, carries warmth and tenderness.

Society of Illustrators Gold Medalist Chris Sheban brings his own visual poetry to the story through his luxuriant watercolor and pastel pictures. When Emma has an opportunity to help a bird fly again, for instance, we see her next to Grandfather with her open arms outstretched, having just released the bird who flies into exquisite autumnal light. That's yet another graceful touch of foreshadowing as Grandfather's own release approaches.

In a time when many children have lost grandparents perhaps sooner than they should due to the pandemic, this book may serve as soothing balm. It's meant for readers ages four through eight. 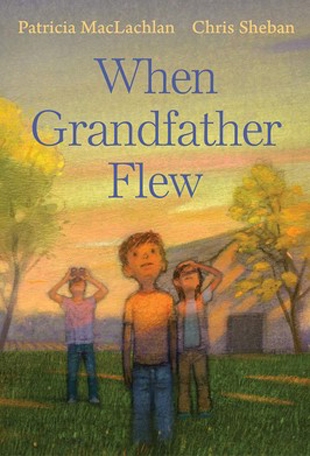