The Good for Nothing Tree

By Amy-Jill Levine, Sandy Eisenberg Sasso
How hope and love can bring life-affirming growth that goes beyond expectations.

What do you do with a fig tree that grows slowly and doesn't produce fruit? The obvious utilitarian answer is: Cut it down and replace it.

But since when do utilitarian laws apply to nature, including human nature? The children in this wise take-off on the gospel parable (Luke 13: 6-9) trust that with patience, nurture, faith, hope, and love, miracles happen. When their gardener friend plants a fig tree that fails to produce, season after season, the children beg her convincingly to let them care for it. Then they follow through: trimming branches, adding mulch, weeding, and watering. They refuse to listen to the gardener and onlookers who say things like, "look at those silly children" and "that good for nothing tree is just taking up space."

Those who are already fans of Amy-Jill Levine and Sandy Eisenberg Sasso (A Very Big Problem, The Marvelous Mustard Seed) will know that the Christian roots of this story are no impediment to the authors making it universal. Illustrator Annie Bowler (who did the pictures for A Very Big Problem and also illustrated Kathleen Krull's Walking toward Peace) reinforces this wide embrace by depicting children of different races, and she goes beyond that to make the pictures child-centric. When we see the children at the foot of the tree with their trowels and watering cans, we are right at ground level with them.

The children's faith is eventually rewarded with juicy figs, as well as shade and some fine climbing. They celebrate with a picnic of homemade fig balls, and readers will be delighted to try the Fig Balls recipe that ends the book.

"A Note from the Authors" in the closing pages encourages caregivers to engage in conversation with children about the self-esteem implications of the story; for instance, "Has there ever been a time when you thought that no one believed in you and in what you wanted to accomplish? ... Have you ever worried that you were taking too long to learn something new?" They also suggest questions around the book's theme of waiting, such as, "Are you ever like one of the children, loving something or someone so much that you are willing to be patient, to reach out, and to help?"

We can imagine the book being a springboard for conversations about stewardship of nature as well. As awareness of the climate crisis reaches younger and younger ages, three to seven year olds will want to hear or read this story again and again for the sense of hope, promise, and effective intervention it provides. 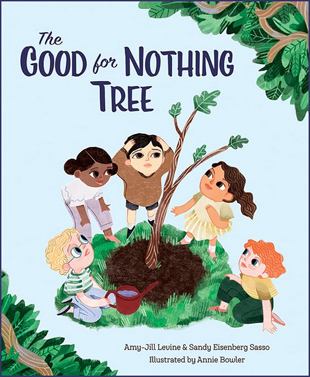