"Because religion is the most serious aspect of life, there is always a danger of it becoming too serious, of it becoming heavy and severe. It needs to be lightened with the joy of holy humor.

"In Judaism, religion and humor are not antithetical. A rabbi is even required to have a sense of humor, since the Talmud says that before a session of Torah study, a good teacher tells a joke to expand his pupils' minds. A Talmudic story tells about Elijah the Prophet appearing in a vision to a mystic named Rabbi Beroka and, in a conversation with him, praising holy badhanim — comedians with a spiritual vocation to cheer up sad people — and saying that they would certainly have a share in the World to Come.

"In recent centuries in Eastern Europe, more ordinary badhanimspecialized in merrymaking at traditional Jewish celebrations, particularly weddings. A badhanwould stand on a table at the feast and tell rhymed jokes — interweaving Torah or Talmud verses — making fun of prominent guests.

"But in the period before the advent of the Baal Shem Tov, the Jewish people, suffering from terrible persecutions, were plunged into a profound sadness and were in danger of losing their collective sense of humor. The Baal Shem Tov taught them to laugh and smile again. He taught that there can be no true worship without joy, and his Hasidic movement revived not only religious singing and dancing, but also Jewish humor and laughter.

"The Besht himself had an active sense of humor. It is said that he once made a humorous remark that brought smiles to the faces of the angels in the highest heaven. More than a few tales portray him as laughing broadly, sometimes without obvious cause. Humor had a natural place in his mysticism too, since jokes and laughter expand consciousness, the mystic goal. He once explained that a holy comedian or jester, like those mentioned in the Talmud, can, by befriending and cheering up a downcast person through jokes and humor, elevate him spiritually. Through humor and laughter for the sake of heaven, he said, you can elevate even your own childishness and raise it to spiritual heights.

"The Besht elevated others through humor and elevated his own childishness too. He also knew when to laugh at the world. He once said, 'Who is a holy jester? Someone who, when everyone is laughing at his piety, laughs at them, unconcerned at their mockery.'

"Rabbi Dov Ber of Mezritch, the Besht's great disciple, took the Talmud's recommendation of a joke before Torah study and applied it to prayer, so as to pray with a joyful expanded consciousness. Once, before daily prayers, he organized a practical joke on one of his Hasidim, and after everyone was convulsed in laughter, he called out, 'Now let's pray!'

"The best humor is elevated and spiritual, but even lowly, foolish humor may be used to ward off sadness and depression. Rebbe Mendel of Yaroslav taught, 'It is so important to avoid any sadness, even about your sins, that you should make yourself happy even by telling and listening to ordinary foolish jokes.'

"One of Hasidism's most appealing qualities is its sense of humor. Some Hasidic rebbes even had a badhan, a jester, of their own, as would a king at court, to lighten their burdens of office. A few of these badhanim, such as Rabbi Mordechai Rackover, the badhanof Rebbe Yaakov Yitzhak, the Seer of Lublin, became famous. The badhanimof great rebbes were not simple fools. They were usually rabbis themselves and spiritually advanced disciples of the rebbe. One of the Seer's greatest disciples, Raabi Naftali of Ropshitz, who was renowned for his wit and wisdom, in his earlier years before he became a rebbe himself, sometimes performed as a badhan at weddings. Rabbi Mordechai Rackover and the Ropshitzer pursed humor as a spiritual path, as a way to God. Both of them appear in the tales in this section." 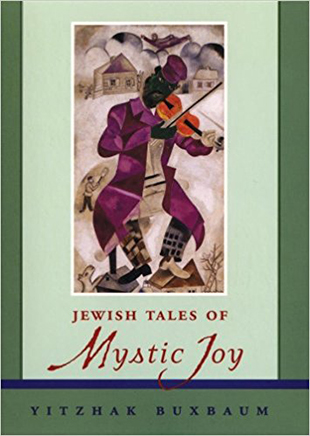