(A message from S&P’s editors about the charges of anti-Semitism against Alice Walker.)

Alice Walker is a Pulitzer Prize-winning novelist and poet. She is known principally for her novel The Color Purple, which was made into a major motion picture and a Broadway play. However, her writing only begins to scratch the surface of her life's work. Walker is also a dedicated activist, theologian, and speaker.

Walker's writing is imbued with a deep sense of spirituality. This is intimately tied to one of her most sweeping impacts, the promotion of "Womanism." Womanism refers to a form of feminism and social theory concerned with the experiences of women of color, and with black women in particular. The theory centers on the intersections of feminism, sexism, and anti-black racism in an effort to address the deeply oppressive realities of life for women of color. While Walker was the first person to have used the term Womanism publically, her words ignited a movement that continues to shape the work of numerous authors and theologians such as Audre Lorde, Bell Hooks, Angela Davis, and Nyasha Junior.

Throughout her life, Walker has been involved in social activism — from her work during the civil rights movement to register black voters in the south, to her participation in the March on Washington, to her outspoken criticism of the state of Israel's treatment of Palestinians, to her active belief and support of the power of pacifism. Walker does not limit herself to the social commentary found throughout her written work; rather she brings her passion for justice into her actions and efforts to create a more just world.

Walker is not the stereotypical representation of a spiritual teacher. Nonetheless, her body of work is imbued with a spirituality that evokes poignant reflections on meaning, empathy, compassion, and the indefatigable nature of the human spirit. Her writings and activism have served as an inspiration and jumping off point for many spiritual journeys. 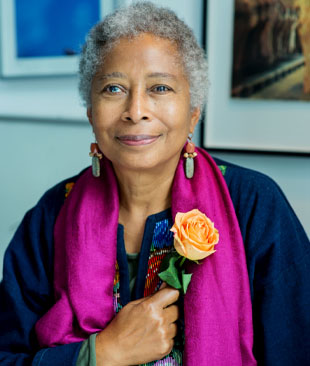