During the 2004 Presidential election John Edwards' "Two Americas" speech seemed like a rather unoriginal way to describe the growing divide in this country. But now, after having spent almost a year shuttling back and forth between the religious heartland of Missouri, and home in New York City, the "two Americas" concept has taken on an entirely new meaning.

Clearly, there are two parallel Americas: and one is a conservative counterculture comprised of tens of millions of evangelical Christians who feel engaged in a culture war with what they perceive as immorality and godless liberalism. They consume their own news and popular culture via Christian television, radio, and publications, and carefully expose their children both to a literal interpretation of the Bible and a call to political activism.

On the surface these kids experience the same things as most middle-class kids: trips to Wal-Mart, homework, sports, dancing to their favorite music, summer camp. But quickly it becomes clear that they are living a version of childhood where devout Christianity is at the center of everything. The music coming out of their stereos may be heavy metal, but it's the Christian take, celebrating the "blood of Jesus." Their homework hails from a strict creation-based curriculum and boys on the soccer team proudly wear red bracelets imprinted with HWJC, short for "How would Jesus compete?"

And when it comes to summer camp, go-carting excursions and the water balloon toss are intermingled with raucous anti-abortion revival meetings.

The camp is a riveting example of a world many Americans either do not understand or dismiss as "fringe" and irrelevant to their own lives. But we felt perhaps they should take a closer look. The people portrayed in this film — white, middle class citizens — are part of an enormous and forceful voting block, an increasingly loud voice in American culture and politics. Together with their children they are preparing not only for Jesus to come back, but to "take back America for Christ."

What does all of this mean for Americans who call themselves secular humanists? Or those who believe in God but feel that our democracy depends on a clear delineation between Church and State? What is the significance of a generation of kids being infused with an evangelical worldview — and how will it affect the country when these children come of age?

These questions informed our own journey to Jesus Camp, and we hope audiences leave the theater discussing where we are as a nation — or whether in fact we are living in two separate nations, presently at war. 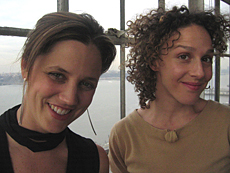