For his documentary Mysteries of the Jesus Prayer, an overview of Eastern spirituality in our time with its emphasis on prayer, silence, and living icons.

The following is reprinted courtesy of Magentic Arts.

Norris J. Chumley, Ph.D. (Executive Producer/Director/Co~Autnor) is an Emmy-Award-winning documentary producer, director, and author. Originally from Indiana, he graduated with a B.F.A., Magna Cum Laude, from New York University in 1981, in Film and Television, and went on to create hundreds of commercials, made-far-television movies, documentaries and specials, including Mark Twain's: The Diaries of Adam and Eve (for PBS American Playhouse), Getting the Love You Want (PBS, with Oprah Winfrey, Harville Hendrix and Helen L. Hunt), and The Gospel According to Jesus (HBO/Cinemax). Chumley's documentary Little Mike was recipient of the SONY/American Film Institute's Grand Prize in Video in 1981. Currently a featured daily columnist for Huffington Post and Beliefnet.com. He is Executive Producer and Director of Media for Columbia University's Department of Religion: Institute for Religion, Culture and Public Life. Additionally, Chumley is an adjunct professor at New York University's Kanbar Institute of Film and Television, and is Chairman of Manhattan Neighborhood Networks, the original and largest public-access television network in America.

This is a film about a simple 12-word prayer, and the mysteries of God. Largely unknown in the west, the Jesus Prayer has been in use for 2,000 years in eastern churches, monasteries and convents. Yet, this prayer and the interior lives of the people who practice it have been off-limits to the west.

"Mysteries of the Jesus Prayer" is at once a travelogue of the mind and heart, and an in-depth foray into spiritual practice. The story is told in the places where Christian asceticism began, in the desert and the wilderness, away from urban settings and the stimuli of civilization. Places where most people are not allowed to go, encountering people who do not usually speak to those outside their inner worlds. I am honored to be given the trust of the ascetic hermits living in caves, and the monks and nuns in the world's oldest monasteries; those who have left the world only to be with God in silence and stillness.

This is a documentary film, but not in the traditional sense. While there is a narrative, it utilizes an apophatic mode: that of negation, or a process of elimination. This makes this film a study in essences and in absences: what is not spoken is as important or more important than what is. What is seen is only a symbol of something not visible. What is heard is a representation, a sound or image unto itself signifying or pointing to something felt, not necessarily heard. Behind the story, there are essences of history, philosophy, theology, practices and rituals.

At times, there is narration by my colleague, The Very Reverend Dr. John McGuckin - both of us affiliated with Columbia University, and Union Theological Seminary in New York City - and me. Father John is also a priest of the Romanian Orthodox Church. I am a converted Orthodox Christian (because of what I experienced and learned in making this film); a producer/director and author, and professor of film and history at New York University. We are taking audiences along with us, repeating a journey that a priest and his student took in the 7th century, in the book, The Spiritual Meadow. We are in the film as anchors for the viewer to come along with. We're superficial gateways to something unspoken and unseen.

Mostly, the hermits, monks and nuns who forward the narrative in their own individual, and personal ways guide the film. This is because we are outsiders, and only those who live in interior worlds can bring us in. The locations, ancient icons, incense, sounds, prayers, chants, light and reflections are also characters in the film. They're not merely symbols; they contain and reflect the essences and energies on other levels. I place image and sound as a priority, allowing long, seemingly empty moments of natural environment and place to speak, instead of direct narration. I cannot tell you how many people have advised me to "tighten up those long scenes, make it go faster." I've ignored them!

Sound is extremely important in this film, and great efforts have been taken to convey the story (or stories) aurally, particularly through the use of natural location sounds. There is much wind to be heard in this study: rushing air over desert sands, wind in trees, the sound of air in large churches. This coincides with the ancient belief that the Holy Spirit is found in the wind, ruach in Hebrew, meaning breath, or wind, prana in eastern religions, meaning "the breath of life." Wind and air is the sound of silence; there is no such thing as silence, as sound is literally carried by air. It does not exist in a vacuum.

Image is also very important. At times I have taken great concern with the purity and clarity of the recorded image. We have filmed exclusively in high resolution, HD or high definition digital media, preserving the integrity of the image. Other times, I have made the decision to degrade the image on purpose to convey a feeling or meaning. Often, we have filmed in locations with very little light for illumination, and the images are resultantly grainy or decayed. Sometimes, the image is blurry or fuzzy, indicating movement or a progression of time that can only be captured on film, and not visible to the naked eye.

Color is also very important in this film. Byzantium and Orthodox Christianity is all about visual stimulus; Churches are full of images, sounds, smells, textures. As the latter two elements, smell and texture, are not recordable in film media, I have emphasized color and light to compensate for an incomplete sensory experience. Color is magnified, contrasts are pushed, comparisons between different times of day and lighting are frequently employed. Icons of Christ and the Holy Theotokos and of patron saints are given great weight, venerated on film, the colors have been magnified, multiple angles are featured. Sometimes the lack of color is highlighted. Often, there is full white, often there is full absence of light and color, black.

Time is also an important element: past and present, future time, elongated time, cyclical time. Time-lapse scenes are included, collapsing hours into minutes; days into seconds. There is a scene that have been sped up 5000 percent. There are three scenes that have been slowed down to almost no time at all. This is very "Byzantine," this manipulation of time and perspective.

I have attempted to place the affective experience of God as the primary subject; something or someone that is by definition unknowable, unseen, invisible and intangible. At best, the experience or sense of God can only be a reflection of an image or sound, a likeness or a symbol. Here, there is only the trail of experience, the remnants of reality; not the experience itself. As human beings working with human materials, there are only sensate tools in which to convey the divine, and they are limited. If there is even the slightest feeling of transcendence, or spiritual connection when watching this film, then my goal has been reached. 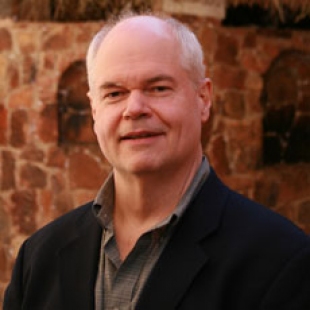 Mysteries of the Jesus Prayer - review