Directed by Kelly Duane
A forceful documentary about the first executive director of the Sierra Club who was also a first-rate environmental crusader.

David Brower joined the Sierra Club because he loved mountaineering and had used these skills when he joined the Army during World War II and served overseas. He became the Sierra Club's first executive director sixty years after John Muir created it in 1892. The home movies and oral histories used as a backdrop to the dramatic story of his work are visually impressive and provide key insights into his character and crusading instincts. The musical contributions by several folk groups are also commendable in the overall feel of the documentary directed by Kelly Duane.

Brower realized that the Sierra Club needed to change its emphasis from conservation to environmental activism when he sensed the government's interest in development. The 1956 building of the Glen Canyon Dam along the Colorado River radicalized Brower. During the 1950s and 1960s, he used movies, books and photographs to educate the public about the dangers of damming rivers and clear-cutting forests. During the Presidencies of John F Kennedy and Lyndon Johnson, Brower hit high stride with the passage of the Wilderness Act, creation of the Point Reyes National Seashore, and halting the damming of the Grand Canyon. Along the way, there are learned commentaries on his life and work by historian Kevin Starr, journalist and environmentalist Martin Litton, and former Secretary of the Interior Stewart Udall. Over the years, Brower became more convinced than ever that compromise over saving wilderness areas was untenable — especially in light of the legacy we pass on to future generations. His zeal eventually led Sierra Club to fire him. He founded Friends of the Earth, an international environmental organization, and worked with them for thirteen years. Brower died in 2000 and according to historian Kevin Starr, he remains an American hero. We concur.

DVD special features include two short films by David Brower (Two Yosemites and Shiprock), interviews with director Kelly Duane and former Secretary of Interior Steward Udall, and a segment about the music of Monumental. 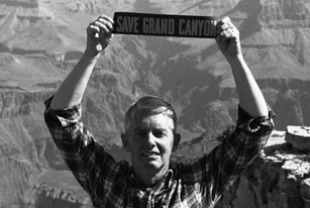