The Death of Mr. Lazarescu

Directed by Cristi Puiu
A sad and scary film about the ignominy of dying alone in a hospital room surrounded by strangers and without dignity.

"If life is a journey, then everyone has death as a hidden traveling companion" Arnold Beisser has written. In ancient cultures, people who were dying were taken care of in their homes by loved ones. Today, far too many people die in hospitals without dignity and in the presence of strangers. The health care system has failed to honor the practice of a good death; many doctors remain more interested in solving the riddle of disease than humane patient care. All of these problems are depicted in this scary and sad portrait of a sixty-two year old widower who finds himself in dire straights physically. When he turns to professionals for medical assistance, they fail him miserably. Dante Remus Lazarescu (Ion Fiscuteanu) has a reputation for drinking too much; it provides him a stay against the loneliness of his life. Those closest to this retired engineer are his three cats who provide him with unconditional love. His sister is not close to him and his daughter now lives in Canada. One day, after waking up with a bad headache and an upset stomach, he calls for an ambulance. He has to call repeatedly. Then Lazarescu asks his neighbors for some pills: they are busy cooking jam. Both of them scold him when they smell alcohol on his breath. Years ago he had an operation for an ulcer. After he throws up again and causes the couple to seriously worry about his condition, a medic named Minoa Avram (Luminta Gheorghiu) arrives.

Lazarescu agrees to go to the hospital, but it is the worst night of the year to do so: there has been a terrible bus accident that has sent many injured and dying people to Bucharest's hospitals. His long day's journey into night is a harrowing experience that he is unprepared for; his physical pain and discomfort causes him to be testy and this draws out anger and impatience from the over-worked hospital staff who are trying to figure out what is causing his headache and stomach problems.

"Because I admire Erich Rohmer so much," says writer and director Cristi Puiu, "I wanted to answer his Six Moral Tales with my own Six Stories from the Bucharest Suburbs." They are slated to be love stories. The Death of Mr. Lazarescu, the first film in the series, deals with the absence of "a love for humanity." Within the elaborate name of the protagonist is Lazarus and Dante. The humiliations this sick man undergoes start with the prejudice he encounters because he drinks too much. Then there is the patronizing view of old people that comes to the fore again and again in the bedside dialogue of his caregivers. Lazarescu cannot help but be affected adversely by the lack of any signs of compassion by those who treat him. The only one who stands by him as he is shuffled from one hospital to the next is Mioara, the medic who arrives at his apartment. When she dares to inform two doctors of their erroneous misdiagnosis of the patient, they rain down abuse on her for daring to advise them about anything. One of the most frightening things about death is dying the way Mr. Lazarescu does. It is a thoroughly modern version of hell and no human being should have to go through it in this dreadful way. 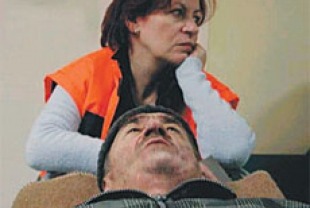