Directed by Mark Levin
An adorable comedy that will appeal to all those who loved and experienced giddy feelings during A Little Romance.

Gabe (Josh Hutcherson) is an eleven-year old fifth grader who lives on the Upper West Side of Manhattan with his father Adam (Bradley Whitford) and his mother Leslie (Cynthia Nixon). They have been separated for a year and a half but still reside in the same apartment. His parents have given him his own little playground extending in a nine-block radius around the building where he lives. Gabe loves hanging with the guys who play basketball and zipping around the neighborhood on his scooter. Among his buddies, rumor has it that anyone who is touched by a girl will get a bad case of the cooties. Then his life changes when he joins a karate class and finds himself teamed up with Rosemary Telesco (Charlie Ray) whom he vaguely remembers from nursery school. Now she is all grown up (taller than him) and demonstrates a grace with language and movement which are both not yet a part of his personal repertoire. Without knowing how to stop himself, Gabe finds his heart beating madly in her presence. At times, he breaks out in a sweat and gets tongue-tied. Equally disconcerting is Rosemary's ability in karate: she is the first one in the class to get a yellow belt. Talk about feelings of self-denigration.

Gabe decides that the best way to stay in close contact with her is to practice karate with her. She invites him to her fancy apartment overlooking Central Park. Her parents are soap-opera stars who seem to expect only the best from their daughter. She is taking cello and tap dancing lessons in addition to karate. Rosemary invites Gabe to go with her to a fitting she has for a flower-girl dress. When he sees her in the beautiful green apparel, she takes his breath away. This infatuation with Rosemary causes Gabe many emotional mood-swings — not the least of which comes when they practice at his house and he must introduce her to his parents. He also gets very jealous when a new boy in karate class replaces him as Rosemary's partner.

Little Manhattan is the brainchild of director Mark Levin and screenwriter Jennifer Flackett who are married. This adorable romantic comedy is carried by a voiceover which works very well. Levin perfected this narrative technique in his responsibilities as a producer and writer of the acclaimed TV series "The Wonder Years." The screenplay will bring back all the confused and dazzling feelings that comprise first love. In addition to this pleasure, there is the obvious affection the filmmakers have for Manhattan and all of its visual variety. Those who live in the Big Apple will recognize many familiar places; Levin and Flackett also play with some magical touches: a skyscraper is transformed into a pirate ship and sheep appear in Central Park. All those who got giddy over A Little Romance are sure to feel the same about Little Manhattan.

Special DVD features include: commentary by director Mark Levin and screenwriter Jennifer Flackett; "From Scout to Screen" making-of featurette; Behind the Scenes in Central Park; and deleted scenes. 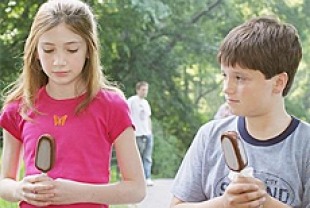