Directed by Sarah Watt
An imaginatively realized and well-acted Australian film about death, dying and grief.

During medieval times, dying persons were seen as prophetic souls and pioneers. Monks and other religious people used to keep skulls on their desks as a reminder of the fragility of life and human mortality. Not so today. People feel incredibly uncomfortable around dying people and desperately try to avoid the subject of death. Very little help is available to those who are mourning the loss of a loved one. All these dimensions of death and dying are explored in Look Both Ways, an award-winning Australian film written and directed by Sarah Watt.

Meryl (Justine Clarke), an artist and illustrator, is returning home from attending her father's funeral. With death on her mind, she has a series of premonitions of her own demise, such as being hit by a car or being strangled by an angry man. Then, when she least expects it, the real thing happens before her eyes as a young man is struck by a train. Andy (Anthony Hayes), a reporter, shows up to cover the story. He is a young man who is divorced from his wife; his girlfriend Anna (Lisa Flanagan) has told him that she is pregnant with his child. No wonder the story he writes is about male depression and suicide.

Nick (William McInnes), the photographer, has a heightened interest in every aspect of life since receiving a diagnosis of testicular cancer that has spread throughout his body. He takes a startling picture of Julia (Daniela Farinacci), the victim's wife. Phil (Andrew S. Gilbert), editor at the newspaper, puts the picture on the cover as a way of paying tribute to Nick, who has told him about his diagnosis.

Writer and director Sarah Watt sheds light on the many angles of death, dying, and grief in this imaginatively realized and wonderfully acted film. It has the same kind of dramatic punch as one of our favorite Australian movies, Lantana. Watt, an internationally acclaimed director of animated films, uses this art form for portions of the story, particularly the characters' premonitions of death. She also demonstrates a keen appreciation for the little things that make all the difference when people are struggling with mysteries beyond their control or comprehension. For example, how Nick fumbles around searching for the right moment to tell his mother that she is about to lose another loved one (her husband died of a long and drawn out disease a year earlier). Or how Meryl, an artistic soul, goes to the site where the young man died and puts together a makeshift memorial.

Best of all, Nick and Meryl, a very lonely young woman, start a romance. Love, after all, is the best antidote to death and a way of living that gives color and meaning to all the textures of life. Perhaps the most touching scenes are those with the train conductor (Andreas Sobik), a man overcome by grief whose son compassionately reaches out to him and helps him contact the victim's wife so he can express his condolences. 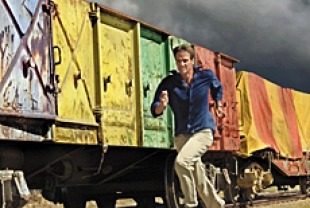