Directed by Andrew Davis
An inspiring look at the Coast Guard's Rescue Swimmers whose motto is "So others may live."

There is something inherently precious about the act of saving the life of a complete stranger in a world where hostilities against people we do not know or understand is rampant. There have been movies about cops, fire fighters, and ambulance drivers but not about rescue swimmers. These brave men and women save about 5,000 lives a year and yet little is known about them and their training. This action drama directed by Andrew Davis (The Fugitive) from a screenplay by Ron L. Brinkerhoff focuses on the U.S. Coast Guard's elite Rescue Swimmer Program. This rigorous training program is considered by many to be the toughest in the military; nearly 50% of those who enter it eventually drop out. Their motto is: "So others may live."

Ben Randall (Kevin Costner) is a legendary rescue swimmer who has saved many lives and proved to be a miracle worker in the water. But even his courage and will power is tested when he loses his co-workers and helicopter crew in a crash in the Bering sea near Kodiak, Alaska. He is badly hurt, and since his wife Helen (Sela Ward) left him a few months before the accident, his commander (Clancy Brown) gives him a new assignment: teaching the Coast Guard's "A" School for Rescue Divers. Randall isn't happy about assuming this role, but knows that he has more experience than anyone around. Frank Larson (John Heard), the "A" School chief, can't wait to see what he does, whereas Jack Skinner (Neal McDonough), an assistant instructor, seems threatened by reporting to such a maverick.

The new recruits are given strenuous physical, emotional, and psychological workouts along with tests to determine their speed, strength, and endurance in the water. The one who singles himself out from the rest of the class is Jake Fischer (Ashton Kutcher), a swimming champion who immediately says that he will break all the records set by Randall. This young man demonstrates natural leadership abilities but also puts himself first in all situations. He gets in trouble by staying out with his new girlfriend Emily (Melissa Sagemiller), a spunky teacher. Maggie McGlone (Bonnie Bramlett), a singer who operates a music club near the base, gives Fischer a sense of what distinguishes Randall from all the other rescue swimmers.

The Guardian works as an engaging drama about the attempts of a middle-ager who has seen it all to pass on his wisdom and insights to the next generation. It turns out that Randall and Fischer have more in common that others know. Costner excels at this kind of role, and he is convincing every step of the way. Kutcher puts in a stellar performance as a young man who comes into his own under the guidance of an inspiring role model. The rescue sequences at sea are dramatic but it is the inner changes in Randall and Fischer than make the movie worth seeing. Here heroism doesn't mean winning but putting others first. There is even a mythical spiritual message at the end of the film that will appeal to many. 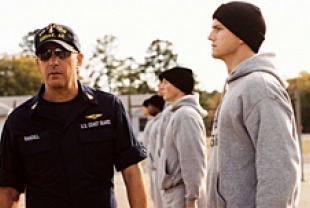 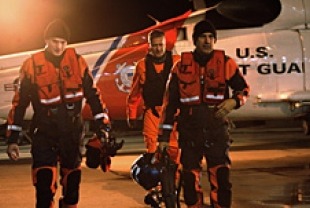 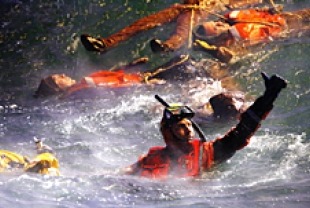 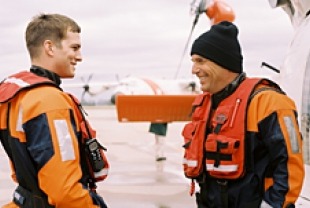