Directed by Barry Jenkins
Two African-Americans together in San Francisco for a weekend trying to take a one-night stand to a more intimate level.

Many people have left their hearts in San Francisco, as the song reminds us. It is a perfect place for romance with its hillside views, quaint neighborhoods, and pulse of life without the manic pace of East Coast cities. African-Americans Micah (Wyatt Cenac) and Jo (Tracey Heggins) meet at a party, get drunk, and have sex. When they wake up in the morning, the past evening is a haze to both of them. They each dutifully put toothpaste on their fingers and brush their teeth before heading out on to the streets.

At breakfast, Micah tries to make conversation but she is very nervous and uncommunicative. He asks her what she does and she tells him that she is unemployed. She doesn't want to know what he does for a living. They part ways after taking a cab, but he finds her wallet on the floor. On Sunday, Micah rides his bike in search of her. He finally tracks her down at a nice apartment.

He learns why Jo seems so ill-at-ease with him: she has a white boyfriend who is in London and pays rent for her apartment. Micah sings a song for her and does a cute drawing for the empty walls of the place. He accompanies her on an errand and then takes her to the Museum of the African Diaspora. Micah tells her about his fulfilling job as an aquarium designer who brings beauty into the lives of people. But primarily, he defines himself as a black man. He complains about the small number of African-Americans in San Francisco, only seven percent of the total population. Micah is also concerned about the increasing gentrification of the city which is pushing the poor out of neighborhoods. Jo is not concerned about such matters and finds Micah's rants hard to swallow. They return to his apartment for dinner, sex and dope, and then they go dancing at a club.

African-American writer and director Barry Jenkins has made an endearing film about two people who connect but struggle to understand and appreciate each other. Micah seems to want to take the relationship to another level but Jo is troubled about betraying her boyfriend. There is a bittersweet quality to this relationship which signals the transitory nature of so many urban romances. Both performances by Wyatt Cenac and Tracey Heggins are very appealing.

Special features on the DVD include director Barry Jenkins's notes and an in-depth interview with Jenkins at the London Film Festival. 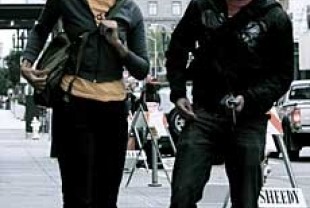