Directed by Sterlin Harjo
A wonderful and liberating film about a dying Native American's final journey with a loving companion by his side.

Ajaan Lee has written: "Aging, illness and death are treasures for those who understand them. They're Noble Truths, Noble Treasures. If they were people, I'd bow down to their feet everyday." Sadly, in our times people do just the opposite: they run and try to get as far away as possible from these three. Not so in this wonderful and liberating film written and directed by Sterlin Harjo (Four Sheets to the Wind), who belongs to the Seminole and Creek Nations. Here we accompany an elderly Native American couple on their last journey together; one is dying and the other has chosen to be a loving companion on the trip.

Frankie (Richard Ray Whitman) is in the hospital with a terminal illness. He has convinced his former wife Irene (Casey Camp-Horinek) to help break him out of this place and to drive him across Oklahoma for a last visit with his estranged daughter and to see his grandchild. Along the way there are other stops. An older son who lives alone is a man of few words but is genuinely happy to see his father. Irene suggests they have lunch with some kooky nephews who recall how Frankie abandoned her. One of them shouts out a blessing for the meal and the rest of the customers in the place don't even notice.

Frankie wants to stop in a town where there is a revival. It offers him a chance to hear some tribal music which soothes his troubled soul. Then a white man who comes across Irene giving Frankie some cedar in a dish at first wants to kick them off his property. But when he learns what is going on, he shares some pot with them. Frankie and Irene harvest more memories and share some laughs.

Barking Water is the kind of independent film that touches the heart with its quiet rhythms and quirky characters. This dying man has made plenty of mistakes in his lifetime and he regrets that he didn't think more about the decisions he made. His reconciliation with Irene is touching and so is her compassionate choice to drop everything to be with him on this final journey. People need not die alone; it is far more comforting to be in the presence of another. There is also the unfinished business which must be taken care of. Frankie does that in his own quiet way and affirms his belief in Spirit. As the Buddhist teacher Larry Rosenberg reminds us: "Death is not waiting for us at the end of the road. It is walking with us the whole time." 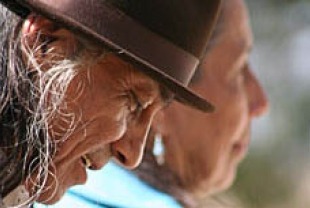