Directed by Jennifer Baichwal
An alluring documentary about the shocking power and mystery of lightning in human experience.

In her book A Match to the Heart: One Woman's Story of Being Struck by Lightning, Gretel Ehrlich writes: "The image of lightning occurs in all cultures as an emblem of power, chance, providence, and destiny, or as a piercing light that reveals divinity." Jennifer Baichwal (Manufactured Landscapes) directs this alluring documentary which probes the many mysteries surrounding lightning and the responses of those who feel its power or watch family, friends, or strangers die when struck by it. Although one's chances of being hurt or killed by lightning are one in 700,000, many are very frightened by this possibility. And, make no mistake about it, this fire power is equally hard on trees which bear the scars of being scorched from on high.

Baichwal focuses on a varied group of individuals who present their experiences: a young man who loses a camping buddy who takes a direct hit and is burned in his lungs; a French photographer who is fascinated with lightning; a spiritual counselor whose life was turned around after being dead for a time; and some Mexican women whose children died after being struck by lightning. They do not put the blame on God like those who call such disasters "acts of God." Instead one of them thanks God for making her child an angel. This view is called "magical thinking" by writer Paul Auster who lost a friend to lightning but sees no meaning in it at all. Yet after reading aloud a story about it, he seems visibly moved. These segments work well in tandem but several others stretch our patience with their limited resonance to the major themes.

Special features on the DVD include a video interview with the director, Peter Greenaway's rare 1980 27-minute short film Lightning: Act of God, video interviews with Peter Greenaway and Fred Frith and performance footage, and readings by Paul Auster from four of his works including City of Glass. 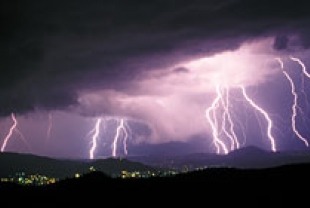