Directed by Jessica Hausner
A powerful and poignant drama about Lourdes, miracles, faith, grace, and the mysteries surrounding cures that go beyond reason and explanation.

Christine (Sylvie Testud) is a young woman confined to a wheelchair by multiple sclerosis. She joins a large group of pilgrims seeking a cure for their diseases, disabilities, and ailments. They have come to Lourdes, a sacred place where 14-year-old Bernadette Soubirous saw the Virgin Mary in 1858. She was canonized by Pope Pius XI in 1933. Now over one million pilgrims visit Lourdes every year where they attend religious services, pray, and bathe in the grotto waters which many believe have healing powers.

Christine has come to this world-famous French Catholic shrine out of curiosity even though she admits that she would rather be in Rome, a city with a rich cultural tradition. Her roommate is a very pious Catholic woman (Linde Prelog) who is eagerly seeking a miracle cure. She becomes very close to Christine, intuitively sensing that she is a very special person. Sister Cecile (Elina Lowensohn), a serious nun who is leader of this seven-day pilgrimage, welcomes everyone.

Christine is to be looked after by Maria (Lea Seydoux), a very pretty volunteer who is attracted to an Order of Malta officer, Kuno (Bruno Todeschini). Her duties include dressing Christine, spoon feeding her food, pushing her wheelchair, and putting her to bed at night. Other pilgrims serve as a sort of Greek chorus offering commentary on the religious service, the grotto, the stations of the cross, a nighttime gathering with pilgrims holding candles aloft, and a healing service conducted by single priest. Christine admits that she feels "useless" and that life is passing her by. In confession, she talks about her anger at being paralyzed and her envy of others who have a normal life. When she is miraculously cured and recovers her ability to walk and move again, Christine is stunned and others on the pilgrimage respond in a variety of ways.

Writer and director Jessica Hauser has made an engaging and thought-provoking film that skillfully explores the dynamics of faith, grace, doubt, and miracles. This drama was shot on location in Lourdes. Thankfully Hauser refrains from ridiculing the simple piety of the pilgrims, the commercialism of Lourdes, or the power and authority of priests. She also escapes the danger of making a sanctimonious drama. One of the main characters in the story is a thoughtful and caring priest (Gerhard Liebmann) who has the difficult task of responding to the many questions of the pilgrims. He sheds light on Catholic understandings of faith, humility, the healing of the soul, and the uniqueness of every person as part of God's love of diversity.

Best of all, we come away from this film about Lourdes with a deeper appreciation for the mysteries of both grace and the human personality. There are no definitive answers to miraculous cures, and the most we can do is rejoice in them when they happen and refrain from the need for explanations. 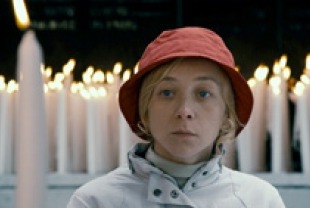