Directed by Raymond De Felitta
An immensely entertaining film about family secrets and the many roles we play in our private and public lives.

Secrets are a family's hornet nest; once they are stirred up, there is plenty of stinging and pain to go around. Vince Rizzo (Andy Garcia) is a corrections officer who lives with his wife Joyce (Julianna Margulies) and their two children, Vivian (Dominik Garcia-Lardo), a college student, and Vince Jr. (Ezra Miller), a teenager, on City Island, a fishing village on the outskirts of the Bronx. Vince is secretly taking acting classes and has told Joyce that he is playing poker with his buddies. He surprises everyone in the family when he brings home Tony (Steven Straight), who has been in prison. Another secret he keeps is that this young man is his illegitimate son. Tony has a facility for drawing others out and suddenly he becomes the catalyst in exposing a batch of other family secrets which have been hidden away.

For example, Tony sees Vivian at a club and realizes she has dropped out of college and is working as a stripper to get the money so she can get back in. Vince Jr., who is a very clever and caustic lad, is obsessed with watching overweight women eating large quantities of food. Searching the Internet for a site that caters to his fantasies, he discovers that his neighbor (Carrie Baker Reynolds) has her own site; she invites him over to her house for some fun. When Joyce learns that Vince has been lying to her about playing poker, she leaps to the conclusion that he is having an affair. So she decides to fulfill one of her desires.

Meanwhile, Vince is befriended by his acting partner (Emily Mortimer) in a class taught by a veteran drama coach (Alan Arkin). She convinces him to audition for a role in a Martin Scorsese film. It is a delicious sequence as Vince tests his acting abilities and is pushed to reveal even more about himself.

Writer and director Raymond de Felitta has fashioned an immensely entertaining film about family secrets and the many roles we play in our public and private lives. Andy Garcia hits high stride as a man with many hopes and dreams; Julia Margulies is passionate as his quick-to-anger wife; and Ezra Miller is a hoot as the teenage son with a caustic tongue.

Special features include an audio commentary with writer/producer/director Raymond De Felitta and producer/actor Andy Garcia, a "Dinner with the Rizzos" feature, and deleted scenes. 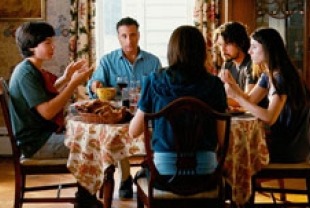 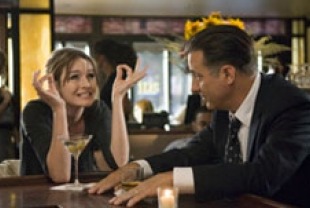