Lord, Save Us from Your Followers

Directed by Dan Merchant
A documentary by an Evangelical Christian on the futility and divisiveness of the culture wars.

Dan Merchant describes himself as an Evangelical Christian and the question which animates his documentary is "Why is the gospel of love dividing America?" To make his point and to attract attention on streets across the country, he becomes "Bumper Sticker Man" wearing a jumpsuit covered with religious and political slogans which speak to the great divide between secular humanists and the religious right. Through interviews with ordinary people, Merchant learns that Christianity is viewed by many as hypocritical, peddling judgment and hatred, and moralistic.

The director is troubled by the divisiveness and bombast that characterizes talk about religion in America. He is puzzled when he visits Ethiopia, a poor African nation, and finds the Christians there to be full of joy, kindness, and grace. Why does expression of faith in the U.S. stir up more controversy than inspiration? Is the culture war behind all the rancor? This seems to be what Tony Campolo, one of the most articulate evangelicals around, thinks: "Do you realize what you are doing when you frame the discussion in such an antagonistic, polarizing, hateful manner? A movement can exist without a god, but never without a devil. There has to be an enemy destroyed."

The religious right has had plenty of practice in warfare against liberals and secular humanists. Merchant shows snippets from longtime combatants James Dobson, Jerry Falwell, Pat Robertson, Bill O'Reilly, Ann Coulter, Michael Reagan, and others. On the other side of the divide, he talks to Al Franken, drug activist Sister Mary Timothy, Bill Maher, and even does not edit out Tony Campolo's description of Daily Show comedian Jon Stewart as a prophet. We see how the battle lines have been drawn in a roll-call of issues such as homosexuality, abortion, evolution vs. creation, pornography, and consumerism.

What is missing from this documentary are the voices and perspectives of Progressive Christians. Certainly they could have made a valid and enlightening addition on the topics of war, racism, and poverty, which are covered all too briefly. Instead, Merchant spends time with Ron Luce, founder of the Battle Cry movement for Christian youth; a Family Feud style game of Culture Wars between teams of Liberal Media Elites against Young Conservatives; and a cooperative effort between World Vision and Portland's secular rock station to help 400 AIDS orphans in Ethiopia.

The filmmaker then salutes his heroes of conscience and love: Bono, Rick Warren, Nelson Mandela, and Pope John Paul II. Perhaps the most emotionally affecting sequence of the documentary is when Merchant sets up a confessional booth at a Gay Pride event and apologizes for his own homophobia, the church's judgmental response to AIDS victims, and his own failure to incarnate the love of Jesus for all people. Asking forgiveness is a perfect place for Evangelical Christians — and all other believers as well — to find their way back to the humility, compassion, and empathy of Jesus of Nazareth.

Special features on the DVD include "Bumper Sticker Man Goes to Church and Goes to College"; a music video, "We Are All the Same"; and a set of conversation starters for groups seeing the DVD together and discussing it. 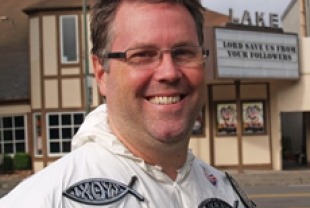