Directed by Drake Doremus
A fresh and funny exploration of the close encounter of two brothers who have been estranged from each other for two years.

Many brothers — born of the same parents — are worlds apart in taste and temperament. The lover of classical music cannot understand the younger brother who is mesmerized by rock 'n' roll. The one who gets along with everyone has a hard time comprehending his isolated brother. Nurtured in the same dark womb and raised under the same roof, they nonetheless share common experiences which bind them. See the paradox here? The one who is most unlike me is also the one who is most like me. This understanding forms the backdrop of Douchebag, a fresh and funny drama directed by Drake Doremus (and cowritten by Doremus, Andrew Dickler, Jonathan Schwartz, and Lindsay Stidham). The movie focuses on the reunion of two estranged brothers who have not seen or been in touch with each other for two years.

In a few days, Sam (Andrew Dickler) is getting married to Steph (Marguerite Moreau) in Los Angeles. He is a very smart and opinionated young man with a full and bushy beard. He takes care of plants as work and also makes the most of his green thumb in the backyard garden. Sam is also a wizard in the kitchen where he cooks up vegetarian dishes and lectures people on this lifestyle. When Steph wants to know why his younger brother Tom (Ben York Jones) is not coming to the wedding, Sam evades the question. Steph takes things into her own hands and drives to Tom’s place in another city and volunteers to bring him home with her. He is both confounded and pleased with her initiative and enthusiasm.

We have already learned that Tom is an irresponsible young man who dabbles in art and is being financially supported by his parents. Compared with Sam, he is verbally and socially awkward. Reunited at last, the two brothers carefully avoid talking about what has driven them apart — a gigantic elephant in the room. But when Sam gets into a debate about whether figure skating is a sport, we soon see signs of his "douchebag" behavior. (The term refers to a person, usually male, with a variety of negative qualities, especially arrogance, and engaging in obnoxious and/or irritating actions without malicious intent.)

When the subject of dating comes up, Tom shares a story about his first love affair in fifth grade with Mary Barger, who was very taken with him. Sam has the outrageous idea that they locate this girl as his brother’s date for the wedding. They find three women in Southern California with that name and they hit the road to check them out; Steph is quite upset about being saddled with all the final preparations for her wedding.

On the road, their first encounter with a woman named Mary Barger turns out to be a dead end. The second encounter, same result. Sam and Tom spend an evening drinking beer in a motel and come as close to bonding as they have ever done. But afterwards, Sam slips away for a sexual rendezvous with a woman he met at a tea shop. Tom is astonished at his brother’s betrayal of Steph and reminded of the incident from the past which precipitated their estrangement from each other. On the road together, it is Sam who comes to some fresh insights about his own fears, foibles, selfishness, and self-destructive behavior. Wanting to help Tom out is a breakthrough, allowing him to acknowledge his own need for reformation.

Douchebag vividly captures and conveys some of the paradoxes and emotional energies of the sibling relationship. 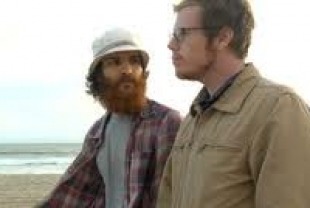