Directed by Tom Tykwer
For writer and director Tykwer, the meaning of life is strongly colored by small incidents of coincidence.

This innovative German film written and directed by Tom Tykwer has been called "a post-MTV classic." It is propelled by a techno soundtrack and pop-video aesthetics. In this hyperactive story, Lola (Franka Potente), a tattered Berliner with red hair, learns that she has 20 minutes to come up with 100,000 marks for her boyfriend Manni (Moritz Bleibtreu). If she doesn't get him the money, a homicidal gangster will kill him. Similar in theme to Sliding Doors, the film presents three alternative versions of Lola's response to this cry for help.

For writer and director Tykwer, the meaning of life is strongly colored by small incidents of coincidence. As Lola runs from here to there in the three different timelines, she's forced to deal with her father's adultery, her boyfriend's armed robbery of a store, a bank stick-up, a road accident, and the fate of a tramp who mistakenly took Manni's money in the first place. For Lola, love, death, and fate are the determining factors that spell out the meaning of her life. 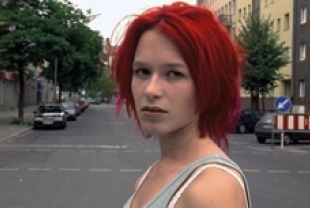 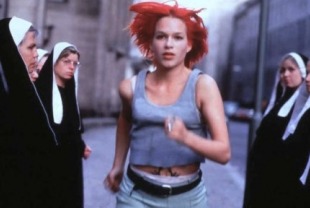 R - some violence and languge