Directed by Dan Rush
Story of a suburban sales executive who reaches a dead-end and must re-evaluate his life while practicing the salutary art of letting go.

In these times, many people are learning about letting go because of unforeseen debt, unemployment, or natural disasters. They must surrender their fixed ideas about how the world works and how people are supposed to behave. Take some cherished idea of yours and try to change it; you will see that resistance is very strong. The mind likes the security that comes with long-held ideas and attitudes. Equally difficult is letting go of our possessions. It is natural that we cling to things since we have been taught since childhood that a measure of our success is the number of toys we have accumulated over the years.

Everything Must Go, written and directed by Dan Rush, is based on a short story by Raymond Carter about a man who is forced by circumstances beyond his control to take stock of his life. This story challenges us to see the art of letting go as a spiritual practice that opens us up to new possibilities. Nick (Will Ferrell) is an alcoholic sales executive who after being fired from his job arrives home to discover that his wife has left him, changed the locks, voided his credit cards, and placed all of their possessions in the front yard. Nick is stunned by the severity of his situation and even more by how embarrassing it truly is.

Although none of his neighbors are willing to offer assistance, a few people come through to help him. One is Kenny (Christopher Jordan Wallace), a black kid who could use some extra money. He prices the Nick's possessions to sell in the yard sale. Nick's sponsor, a police detective (Michael Pena), gives him five days to clear the clutter and then leave. The final person who offers him some companionship is Samantha (Rebecca Hall), a pregnant young photographer who has moved in across the street and is setting up the house for her busy husband. But when Nick drinks too much and brings her down with a judgmental attack, she flees. Feeling desperate and lonely, Nick locates Delilah (Laura Dern), a high-school friend and goes to see her. But the old magic isn't there any more and he realizes that he has to really let go of the past and begin anew.

"Great is the art of the beginning, but greater is the art of ending," Henry Wadsworth Longfellow once observed. There is a time and a season for everything and this must be acknowledged by all people. In relationships of marriage and friendship, people do occasionally need to say goodbye and move on to other pursuits. But often we are stuck for a long time, unable to muster the strength or the courage to let go of our attachments.

Everything Must Go is a compelling drama about unexpected transitions in our lives which offer us the chance to re-evaluate our work, our relationships, our failings, and our addictions. Endings give us the opportunity to practice letting go so we can clear the decks for a new beginning.

Special features on the DVD include a behind the scenes featurette; an audio commentary with director Dan Rush; and a Will Ferrell featurette. 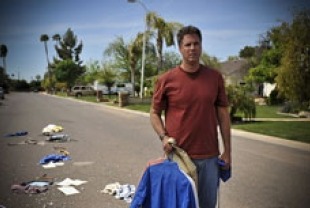 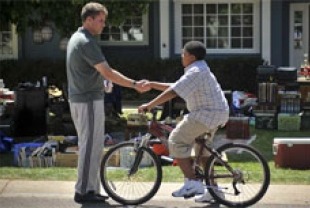 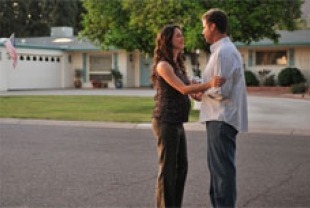