Directed by Lisa Krueger
Challenges us to ponder the importance of promises, the power of love, the difficulty of keeping faith with one another, and the long, hard road of zeal.

"Some people are born with a knack for faith. They're not afraid of permanence. They're right at home with it," says Joline (Heather Graham in a luminous and vibrant performance) just before her marriage to Carl (Luke Wilson). Speaking directly into the camera, she talks about nuns who, before giving themselves to God, lie on the floor and pray for the strength to see their commitment through. Joline follows suit, lies on the floor, and prays to stand by her man forever.

Later — 595 days, to be exact — she is happy and prosperous in her job of running a club in New York City. However, Carl's career as a photojournalist is floundering. The only assignments he's getting are shots of food. Claiming to need some space to sort out things, he walks out on Joline, leaving no forwarding address.

Whereas others would sink in despair or burn in a slow rage at such a development, our heroine is adamant about remaining true to her commitment. With the prowess of a detective and the determination of a hound dog, Joline tracks Carl down in El Paso. In this desert community on the border near Mexico, her quest turns spiritual. With compassion, Joline befriends Carmen (Patricia Velasquez), the girl Carl has been dating. Carmen, in turn, introduces her new friend to Grampy (Alfonso Arau), a medicine man who teaches Joline some rituals to protect Carl from Carmen's rejected and jealous suitor, who is very violent.

Marriage for many of us is one of the last places in contemporary life where our faith, our commitment, and our spiritual resiliency can flourish and bloom. Joline is a true believer, a zealot for marital love who will do anything it takes to keep her vows. She inspires her brother Jay (Casey Affleck) and wins the adoration of Neil (Goran Visnjic), an Eastern European artist who makes pinatas. He finds her devotion to Carl sexy. And it is — so pure, so true, so implacable. But in the end, Joline is led to a new commitment — one that grows gracefully out of her experiences in the West.

Committed is a gem with its quirky storyline and endearing characters. Written and directed by Lisa Krueger (Manny and Lo), this drama challenges us to ponder the importance of promises, the power of love, the difficulty of keeping faith with one another, and the long, hard road of zeal. 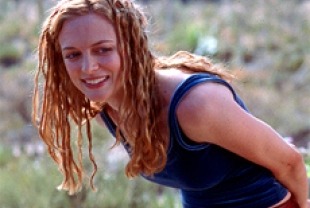