Girl on the Bridge

Directed by Patrice Leconte
A beguiling French romantic drama that explores love, luck, and telepathy through a tale about a knife thrower and his beautiful assistant.

The word "telepathy" literally means "feeling at a distance." Frederic Myers, the scholar who invented the word, once defined love as "a form of exalted and unspecialized telepathy." Anyone who has ever been caught up in a spellbinding romance knows this to be true. Lovers are able to magically commune with each other even over vast distances. They are so attuned to each other that when one is feeling lonely, the other immediately calls.

In the prologue to Girl on the Bridge, 21-year-old Adele (Vanessa Paradis) is being interviewed by another woman. She confesses that due to her sexual promiscuity with men, her life is a terrible mess. She gets carried away by promises that shouldn't be taken seriously. And she has incredibly bad luck.

Later, Adele is on a bridge in Paris, contemplating suicide. Gabor (Daniel Auteuil), a middle-aged man with an intense look in his eyes, appears on the scene and tries to talk her out of ending her life. She leaps; he follows and rescues her. At the hospital where they are being treated for hypothermia, Gabor offers her a job as a human target — he's a knife thrower. "With your body and my skill we can go far," he tells her. Besides, what has she got to lose; she was about to give up anyway.

They head off to Monte Carlo. On a train, she has sex with a man in a restroom. Gabor tells the fellow to buzz off: "I'm a good fairy." True to his word, he pays for Adele's makeover into a stunning target. "There's no wrong road," Gabor assures her, "only bad company." He pushes himself upon some circus entrepreneurs by promising to "throw blind." Adele surrenders herself to the knives and the two of them find themselves united in telepathic harmony.

After winning lots of money in a casino following Gabor's instructions, Adele pushes her luck in a raffle and wins a car. Suddenly the hapless waif is on a big-time roll of good luck and Gabor has found his muse. He presents her with a bill torn in half, stressing how each part, like they do, needs the other. On a cruise ship, Gabor throws the knives while Adele spins on the "wheel of death." By now she feels an erotic surge during this experience; fear and pleasure are entwined. But then she succumbs to her sexual addiction and runs off with a newly married Greek. Gabor loses his job and crashes into a deep depression. Can they reconnect?

Patrice Leconte directs this French black-and-white drama based on a witty screenplay by Serge Frydman. As an exploration of love, luck, and telepathy, The Girl on the Bridge is a beguiling film from start to finish. 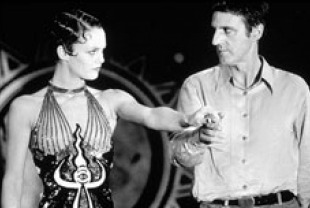