Directed by Edward Yang
A Taiwanese film about a multi-generation family that helps us see how love and work are the bearers of meaning and transformation.

Although we go searching far and wide for moments of grace and transformation, they are usually taking place quietly right beneath the surface of our private and public lives at home and at work. This dynamic is beautifully unfolded in Taiwanese filmmaker Edward Yang's Yi Yi (A One and a Two), a multigenerational drama set in contemporary Taipei. Filled with magical moments, it is one of the best films of 2000. Beginning with a marriage ceremony and ending with a funeral service, Yi Yi helps us see how love and work are the main bearers of meaning in our busy lives — to a far greater extent than we usually think.

NJ Jian (Wu Nienjen) is a middle-aged partner in a computer hardware firm with his brother-in-law A-Di (Chen Xisheng), who has just gotten married. At home the mother (Tang Ruyun) of his wife Min-Min (Elaine Jin) suffers a stroke and is taken to the hospital in a coma. The doctors recommend that the family take her home and talk to her in hopes that she might regain consciousness. The stress is too much for Min-Min who decides to go on a religious retreat. Meanwhile, her teenage daughter Ting-Ting (Kelly Lee) gets involved with Fatty (Yupang Chang), the ex-boyfriend of a neighbor whose noisy apartment is unsettling to everyone in the building. Eight-year-old Yang-Yang (Jonathan Chang) refuses to talk to his grandmother. He gets in trouble at school and then devotes himself to a new project — taking pictures of the backs and necks of his family and others. Yang-Yang is really interested in the mysterious invisible world.

Having bumped into Sherry (Ke Suyun), his first love whom he hasn't seen for 20 years, NJ decides to rendezvous with her in Tokyo where he's meeting with Ota (Issey Ogata), an innovative designer of games software. In a state of confusion about his career and family life, NJ struggles with his feelings for Sherry, who's now married to a wealthy American. Mr. Ota, the wizard of technology who always wanted to be a magician, turns out to be his unlikely adviser on this matter. He helps NJ realize how frightened he really is about change. Although Sherry wants to start over with him, NJ refuses.

Back home, Min-Min's mother briefly comes out of her coma to provide balm for Ting-Ting, who desperately needs some loving attention after being rejected by Fatty. NJ decides to bow out of his partner's business and Min-Min returns from her retreat. After his grandmother peacefully dies, Yang-Yang writes a note to her describing things of concern to him.

"The real voyage of discovery," Marcel Proust has written, "consists not in seeking new landscapes but in having new eyes." How true! This wonderfully conceived and executed film shows us the high price we pay for love. It reveals the subtle and sneaky ways in which people reach out for each other. It also makes it clear that forgiveness comes in moments when we least expect it. And, like Jesus says in the Gospels, it is a child who often leads us by helping us to reverence the mystery of the invisible world that is so near at hand. 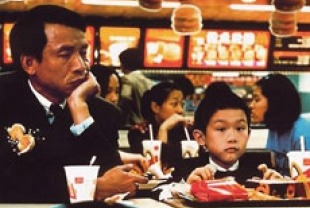