You Can Count on Me

Directed by Kenneth Lonergan
A complicated story of siblings attempt to connect with each other despite their differences.

The family is an amazing pressure cooker. Brothers and sisters grow up together, nurturing and challenging each other. This intimate relationship is often a mixture of love and hate, which may carry over into adulthood. You Can Count on Me is one of the best films in many a moon to deal with the passions siblings call forth from each other without half trying.

Orphaned when their parents were killed in an automobile accident, Sammy and Terry relied upon each other growing up. Now, as adults, they've been out of touch. A single mom, Sammy (Laura Linney in an Academy Award caliber performance) still lives in the same small New England town with her son Rudy (Rory Culkin). When Terry (Mark Ruffalo) finally decides to visit his sister, it's because he needs some money to give to a girl he's made pregnant. Sammy asks why he hasn't communicated with her, and he reveals that he served some time in jail in Florida and didn't want to trouble her.

As this family drama, written and directed by Kenneth Lonergan, unfolds, it becomes clear that Sammy and Terry are direct opposites. She goes to church, has a steady job at a bank as a loan officer, and loves the routine of life in her community. Terry is a drifter who shuns traditional values and the tediousness of life in a small town. As so often happens in the mysterious dynamics between siblings, her brother's chaotic presence in her home serves as a catalyst for Sammy. She starts an affair with Brian (Matthew Broderick), the unhappily married new manager of the bank.

Terry, a Peter Pan male who doesn't want to grow up, derives pleasure in taking care of eight-year-old Rudy (Rory Culkin). He treats him to a night out at the pool hall and then gets in deep trouble by introducing the boy to his divorced dad, a cad living with another woman in a nearby town. In the end, Terry's irresponsible lifestyle is just too much for Sammy to handle. Still, this brother and sister discover new things about themselves through their encounter. With candor and compassion, Kenneth Lonergan's movie reveals that even difficult sibling relationships can be rewarding once they're seen as complex, vulnerable, and edifying. 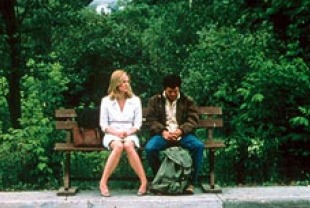 R - language, some drug use and a scene of sexuality