Directed by Steven Soderbergh
A hard-hitting work of social conscience that uses three interweaving stories to show how mood altering drugs have invaded every aspect of American life.

In a time when many American filmmakers are reluctant to take on controversy with stories critiquing major institutions or dealing with complex moral issues, Steven Soderbergh in 2000 did the nearly impossible — created two hard-hitting works of social conscience in the same year. First Erin Brockovich, and then this thought-provoking and inventively directed drama examining the drug problem in the United States. He received the Best Director Academy Award for Traffic.

Loosely based on a British miniseries about the global dimensions of drug trafficking, Stephen Gaghan's multidimentional screenplay, which garnered him an Oscar, tells three interweaving stories about the vast use of mood-altering substances and their invasion of every aspect of American life. More than any book, panel discussion, or initiative from Washington, D.C., Traffic shows how there is no quick fix for this societal problem.

In Tijuana, state policeman Javier Rodriguez (Benicio Del Toro, the Academy Award winner for Best Actor in a Supporting Role) and his partner Manolo (Jacob Vargas) face daily temptations to break the law and profit from the growing drug trade in Mexico, which is handled by two competing cartels. Javier's main temptation comes in the form of his allegiance to General Salazar (Tomas Milian), who claims to be leading the country's war against drugs. Of course, he faces an uphill battle since trade in illegal substances is a very profitable entrepreneurial activity.

In Washington, D.C., Ohio State Supreme Court Justice Robert Wakefield (Michael Douglas) has been named by the President as the new anti-drug czar. He soon learns that there are many different dimensions to the drug problem, from intervention at its source to treatment for addicts, and each has its own special interest advocates. While he is trying to get an overview of the problem, he learns that his teenage daughter Caroline (Erika Christensen) has been experimenting with drugs and is addicted to cocaine. Wakefield's wife (Amy Irving) can't control her, so he returns home. When Caroline runs away from a treatment facility, Wakefield makes her boyfriend Seth (Topher Grace), who introduced her to drugs, take him into the ghetto of Cincinnati to find her dealer. He learns it's easier for high school kids to get drugs than alcohol.

Meanwhile in San Diego, undercover DEA agents Montel Gordon (Don Cheadle) and Ray Castro (Luis Guzman) are doing their part to try to bring down one of the Mexican drug cartels. Eduardo Ruiz (Miguel Ferrer), a low-level smuggler, cuts a deal by agreeing to testify against Carlos Ayala (Steven Bauer), a rich drug baron who lives in the suburbs. When this wheeler-dealer businessman is apprehended, his pregnant wife Helena (Catherine Zeta-Jones) realizes she's been completely in the dark about his activities. She calls upon attorney Arnie Metzger (Dennis Quaid) to help get her husband out of jail. When her young son is threatened by her husband's nefarious associates, she turns a corner and decides to do what she must to protect her comfortable lifestyle. In the background, the DEA agents are watching all her activities.

From what we read in the papers and the picture painted by this film, the so-called war on drugs appears to be a disastrous failure. Hundreds of thousands of people are in jail for drug offenses; millions are dead from substance abuse on all levels of society; and political corruption and violence have been spawned all over the world. For every group of addicts meeting together, there are three meetings of those affected by living in close association with them. The scope of the problem is staggering when you take into consideration those selling drugs, using them, or policing them. This contemporary thriller is a real eye opener; it offers a devastating critique of the present status of the war on drugs.

The DVD includes a featurette about the making of the film, an "electronic press kit" with background information on the film, the theatrical trailers, and television spots. 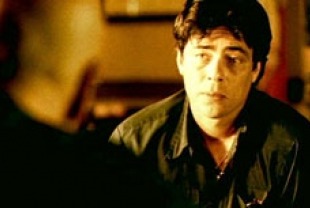