Directed by Wendy J. N. Lee
A documentary about a 450-mile pilgrimage through the Himalayas to spread the message of environmental compassion.

The ecosystem known as the "3rd pole" of the earth, a glacial region of the Himalayas, has been destabilized by dramatic changes of weather brought on by global warming. This phenomenon on the rooftop of the world has been largely ignored by everyone except the people living in the area.

This documentary, directed and produced by Wendy J. N. Lee, begins in Ladakh, India, as the area is devastated by a cloudburst of heavy rains which set off mudslides and flash floods. A Tibetan Buddhist teacher, H.H. the Gyalwang Drukpa, a recipient of a United Nations MDG honor, decides to lead a caravan of 700 pilgrims on a 450-mile walk to spread the message of environmental compassion. This was not an easy trek. The pilgrims crossed some of the most treacherous terrain on the planet at altitudes above 17,000 ft.

One of the most exciting dimensions of this journey is its focus on environmental education. The pilgrims picked up half a ton of plastic litter on their way from village to village. They also educated remote communities on reusing non-biodegradable materials and planting trees. Along the way they modeled a respectful relationship to the earth and all its beings. In one scene, some Buddhist monks gently blow some ants off the path to prevent their being stepped on.

Luckily, there are very few people hurt on the dangerous walk. At one point, they did face sub-zero weather and near-starvation when they are caught in an out-of-season snow storm. But these Buddhist pilgrims make good use of the obstacles they face, embracing them as spiritual teachers.

Director Wendy J. N. Lee captures the beauty and grandeur of the place using a solar-powered camera operated by a Buddhist monk, Ngawang Sodpa. Her sister Carrie is a pilgrim who provides an American's perspective on this environmental adventure.

Other Eco-Pad Yatras have been held in India and Sri Lanka and others are planned. For more information, visit the film's website: http://www.padyatrafilm.com/#synopsis. 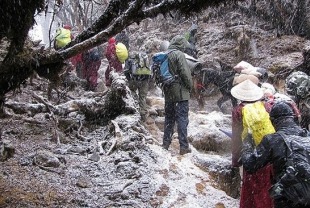 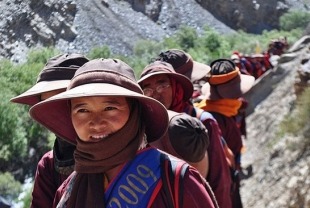 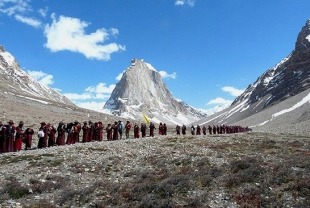 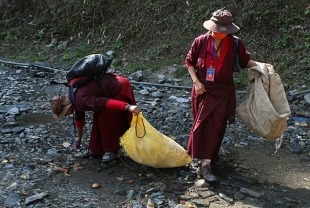 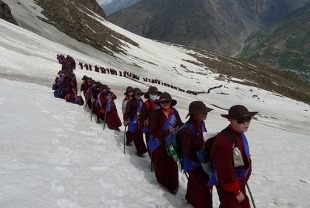 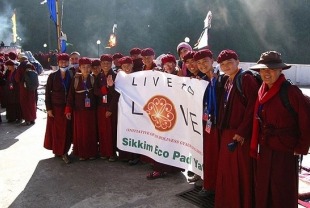