The Taste of Others

"In literature as in love, we are astonished by what is chosen by others," André Maurois once quipped. Agnès Jaoui's French romantic comedy explores this theme through the romantic entanglements of two couples. Who can explain the attractions between individuals with nothing in common? And even more stupefying, why does a pair who seem destined for each other manage to find something that pulls them apart?

Castella (Jean-Pierre Bacri) is a successful suburban businessman whose marriage to Angélique (Christiane Millet) is a lifeless affair. When she wants him to attend a theatre performance of Racine's Bérénice, he reluctantly agrees. Imagine his surprise when he falls in love with Clara (Anne Alvaro), the middle-aged actress who plays the Queen. Much to his delight, it turns out that she is his new English teacher.

From the outset, it is apparent that they reside in two very different worlds. Clara, who is not attracted to Castella, is embarrassed by the intensity of his affection and his inability to relate in a relaxed way with her circle of artistic and cultural friends. She's even more taken aback when he cranks out some poetry for her and purchases a painting from one of her friends just to impress her. Finally, Clara begins to respond to Castella's love.

At the same time these two are working out their feelings, Moreno (Gerard Lanvin), a personal bodyguard for Castella during his business dealings with some Iranians, begins dating Manie (Agnès Jaoui), a Bohemian barmaid. Their passionate romantic relationship hits a snag when Moreno orders her to stop selling hashish as a way to supplement her meager income. Soon it also becomes clear that he's looking for a traditional wife while Manie has no intentions of ever becoming that kind of woman.

The delightful screenplay by Agnès Jaoui and Jean-Pierre Bacri captures the idiosyncrasies and vulnerabilities of these lovers. This charming French film reveals that there is no certainty in any romantic relationship except the prospect of more and more complications. 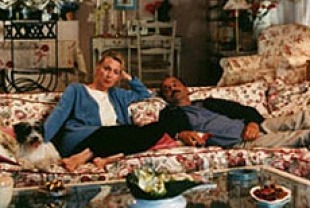